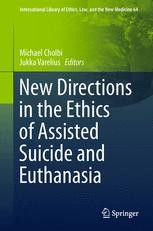 New Directions in the Ethics of Assisted Suicide and Euthanasia

This book provides novel perspectives on the ethical justifiability of assisted dying. Seeking to go beyond traditional debates on topics such as the value of human life and questions surrounding intention and causation, this volume promises to shift the terrain of the ethical debates about assisted dying. It reconsiders the role of patient autonomy and paternalistic reasons as well as the part proposed for medical professionals and clinical ethics consultation in connection with assisted dying, relates the debate on assisted dying to questions about organ-donation and developments in medical technology, and demonstrates the significance of experimental philosophy in assessing questions of assisted dying. This book is ideal for advanced courses in bioethics and health care ethics.