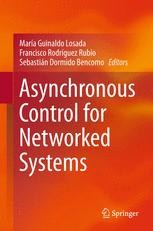 This book sheds light on networked control systems; it describes different techniques for asynchronous control, moving away from the periodic actions of classical control, replacing them with state-based decisions and reducing the frequency with which communication between subsystems is required. The text focuses specially on event-based control.

Split into two parts, Asynchronous Control for Networked Systems begins by addressing the problems of single-loop networked control systems, laying out various solutions which include two alternative model-based control schemes (anticipatory and predictive) and the use of H2/H∞ robust control to deal with network delays and packet losses. Results on self-triggering and send-on-delta sampling are presented to reduce the need for feedback in the loop. In Part II, the authors present solutions for distributed estimation and control. They deal first with reliable networks and then extend their results to scenarios in which delays and packet losses may occur.

The novel results presented in Asynchronous Control for Networked Systems are transmitted in a concise and clear style supported by simulation and experimental examples. Some applications are also provided.

Academic researchers and graduate students investigating control theory, control engineering and computer communications systems can use this monograph to learn how asynchronous control helps tackle the problems of networked systems in centralized and distributed schemes. Control practitioners at work in power systems, vehicle coordination and traffic networks will also find this book helpful in

improving the performance of their systems.
Show all
About the authors

María Guinaldo received the M.S. degree in Physics, the B.S. degree in Computer Engineering from the University of Salamanca in 2008, and the Ph.D. in Computer Engineering from UNED in July 2013. She has been with the Department of Computer Sciences and Automatic Control, UNED since 2008, where she is teaching and research assistant. She has been Ph.D. student visitor in international institutions such as the Automatic control labs in EPFL (2009), KTH (2010, 2011) and GipsaLab-Inria (2012). Her research interests include networked control systems, event-based control, multi-agent systems, and engineering education. She is or has been a reviewer for several journals such as Automatica, IEEE Transactions on Automatic Control, Systems and Control Letters, IET Control Theory and Applications, International Journal of Control, or Sensors.
Francisco R. Rubio received the Industrial Electrical Engineering degree and Doctorate from the “Escuela Técnica Superior de Ingenieros Industriales de Sevilla” in 1981 and 1985, respectively. He received the CITEMA award for the best work on automation by a young engineer in 1980. He is Professor in the Department of Systems Engineering and Automatic Control of the University of Seville.
He has been Head of Laboratory, Deputy Director of the School of Engineering and Head of the Department of Systems Engineering and Automation at the University of Seville. Member of the faculty at the University of Seville from 2000 to 2002 and has served in recent years on various committees at Department and Engineering School levels. He is also the head of the research group “Automation Engineering, Control and Robotics” (TEP-0201).
It has also been peer assessor of research projects and scientific journals and proceedings, and has served as evaluator of the Institutional Program of Quality and the University Professor Accreditation System for the National Agency for Assessment and Accreditation (ANECA, Agencia Nacional para la Evaluación y Acreditación).
He has worked on various research and development projects in cooperation with industry. He has been responsible of the University of Seville of the EU projects Feedback Design for Wireless Network Systems (FeedNetBack) and responsible of several nacional projects: Precision Control in Positioning Systems (CONPOS), Feedback Control of Systems Embedded in Wireless Networks (CONRED), etc. His current interests are in the areas of adaptive control, robust process control, nonlinear control systems, robotics and networked control systems. He has written three books: Advanced Control of Solar Plants and Control of Solar Energy Systems published by Springer-Verlag and Control Adaptativo y Robusto published by Seville University. He has authored and co-authored more than 200 technical papers published in international journals and conference proceedings. He has supervised 13 PhD Thesis.
He has participated in the International Program Committee of 10 international conferences where he has been chairman in many occasions. He is and has been reviewer for journals like Solar Energy, Control Engineering Practice, Journal of Process Control, IEEE Transactions on Fuzzy Systems, IEEE Transactions on Industrial Electronics, European Journal of Control, Revista Iberoamericana de Automática e Informática Industrial…
He has been member of the board of Governors of the Comité Español de Automática (main Spanish Association in Automatic Control) from 2000 to 2006, member of IEEE Control System Society from 1989 and member of the IFAC since 1984.
He received an award in 2003 from Babcock Foundation (IX Annual Competition Actions linked to Technological Innovation, Babcock Foundation) due to the work “Optimization of cooling production trough solar energy”.
Sebastián Dormido was born in Jerez de la Frontera, Spain in 1946. He received his BSc and M. S. degree in Physics from the Universidad Complutense de Madrid in 1968 and 1969 and the Doctor in Science in 1971 from the Universidad del Pais Vasco. From 1968 to 1975 he was successively Assistant and Associate Professor at the Department of Computer Science and Automatic Control of the Universidad Complutense and Universidad del Pais Vasco. Since 1975 he has been Full Professor at the Facultad de Ciencias Físicas of the Universidad Complutense de Madrid (1975-1982) and Facultad de Ciencias of the Universidad Nacional de Educación a Distancia –UNED- (1982-). In 1982 he was appointed Head of Department of Computer Science and Automatic Control. Further he has served as Vicerrector of Research (1983-1985) in the UNED.
He has authored and co-authored more than 250 technical papers in international journals and conferences and has supervised 35 Ph.D. students.
From 2001-2006 has been President of the Spanish Association of Automatic Control, CEA-IFAC where he promoted the relation between the academic and industrial world.
Along his academic career he has been invited to give conferences in numerous academic institutions. Among others they deserve to stand out the following ones: Oxford, Cambridge, Lund, Bradford, Caltech, Moscú, EPFL Lausanne, ETH Zurich, Bochum, Ghent, Stuttgart, British Columbia, Politécnico de Milán, Brescia, Roma, Columbia, Oulu, Trondheim, Southern California, Técnica de Budapest, Técnica de Praga. At the present time 6 of his Ph. D. students are full professors and 16 are associate professors. He has directed more than thirty competitive financed research national and international projects and contracts with companies in the area of automatic control in order to make transfer of the technology developed in his research group to the industrial sector.
2013- Chair of the EDCOM Committee of IFAC, 2013 IPC Chair of the 10th IFAC Symposium Advances in Control Education (ACE’13), 2012 IPC Chair of the IFAC Conference on Advances in PID Control (PID12), 2006 General Chair of the 7th IFAC Symposium Advances in Control Education (ACE’06), Member of the IFAC Harold Chestnut Control Engineering Textbook Prize Selection Committee, 2004 Plenary lecture 2nd IFAC Workshop “Internet Based Control Education (IBCE’04), 2003 Plenary lecture 6th IFAC Symposium on Advances in Control Education (ACE03), 2002 Plenary lecture 15th IFAC World Congress
In 2007 received a Doctor Honorary Degree from Universidad de Huelva, in 2008 the National Automatic Control prize from IFAC Spanish Committee, in 2013 received a Doctor Honorary Degree from Universidad de Almería.