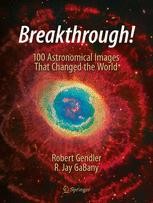 100 Astronomical Images That Changed the World

This unique volume by two renowned astrophotographers unveils the science and history behind 100 of the most significant astronomical images of all time. The authors have carefully selected their list of images from across time and technology to bring to the reader the most relevant photographic images spanning all eras of modern astronomical history. Based on scientific evidence today we have a basic notion of how Earth and the universe came to be. The road to this knowledge was paved with 175 years of astronomical images acquired by the coupling of two revolutionary technologies – the camera and telescope. With ingenuity and determination humankind would quickly embrace these technologies to tell the story of the cosmos and unravel its mysteries. This book presents in pictures and words a photographic chronology of our aspiration to understand the universe. From the first fledgling attempts to photograph the Moon, planets, and stars to the marvels of orbiting observatories that record the cosmos at energies beyond the range of human vision, astronomers have always relied on images to "break through" to the next level of understanding. A subset of these breakthrough images has profound significance in documenting some of the greatest milestones in modern astronomy.

Robert Gendler is a physician who began doing CCD astrophotography in the early 1990s. He spent his first decade imaging from his home using a portable setup. With advances in Internet accessibility and worsening light pollution at home, Gendler began imaging remotely in 2005 from observatories in the southwestern United States and later in Australia. Gendler now spends much of his time mining professional astronomical archives and assembling unique composite images from a wide variety of data sources, including the Hubble Space Telescope, Japan's 8.2 meter Subaru Telescope, and various ground-based professional and amateur systems.

Gendler has published four books on astrophotography including A Year in the Life of the Universe (Voyageur Press, 2006), Capturing the Stars: Astrophotography by the Masters (Voyageur Press, 2009), Treasures of the Southern Sky (Springer, 2011) and most recently Lessons from the Masters: Current Concepts in Astronomical Image Processing (Springer, 2013).

In 2008, he was featured in the PBS documentary Seeing in the Dark by Timothy Ferris, who referred to Gendler as “one of the great astrophotographers in all of history.” Gendler's images have been featured in two national stamp series (United Kingdom 2007, Germany 2011). In 2007 he was the recipient of the "Hubble Award" at AIC. His images have been featured by the NASA site "Astronomy Picture of the Day" over 10

0 times. This work has earned him international recognition and has led to professional collaborations with NASA’s Hubble Heritage team on two Hubble Space Telescope projects (M106 in February 2013, and M31 in February 2015).

R. Jay GaBany, by profession, is an eCommerce product manager working in California and the recipient of five patents for innovations in his field. Over the last decade he has earned a reputation as an elite astrophotographer. His work has been highly recognized internationally. He has also distinguished himself by his collaborations with professional astronomers such as his work with Dr. David Martinez-Delgado on tidal streams produced by galaxy mergers.

GaBany has coauthored several significant scientific papers on the subject. For his contributions at the professional level he was given the Chambliss Award by the American Astronomical Society.

Among his many other accomplishments GaBany’s image of NGC 3521 was selected as the backdrop for the official crew portrait of Expedition 30 to the International Space Station. Incredibly, in 2012, he was selected by Time magazine" as one of "The 25 Most Influential

Pertinent to this book GaBany has written numerous articles, blogs, and reviews for a variety of popular astronomy magazines such as Sky & Telescope, Universe Today, and Astronomy Now.

Selected by Choice magazine as an "Outstanding Academic Title" for 2016

“It is a beautifully illustrated volume starting with a daguerreotype illustration of the moon (1852) and ending with a picture of the Mars Phoenix lander on the Martian surface (2008). … This excellent book should be on the shelves of all libraries. Summing Up: Essential. All readership levels.” (C. G. Wood, Choice, Vol. 53 (8), April, 2016)

“Breakthrough! begins with a short history of astrophotography and the methods that have been used from the middle of nineteenth century all the way to present day, describing on the way the difficulties that were associated with photographing specific objects with specific techniques. The book presents astronomical images that have changed our understanding or perception of the objects in some meaningful way together with an explanation of what and how it changed. … It's a wonderful book.” (AstroMadness, May, 2017)

“Breakthrough! is a marvelous history of imaging. … this marvelous collection of images, supported with excellent descriptions, offers a concise history of the art and science of astronomy, recording the greatest milestones in the history of modern astronomy. I thoroughly recommend this book … . This is a volume worth keeping as a reference source for many years to come.” (Mario Motta, Sky & Telescope, December, 2016)

“This new book is welcome, succinctly telling the story of modern astronomy via a superb gallery. The authors … provide detailed commentary on each image, ably weaving together technical and scientific information. … it’s a beautiful summary of the best that astronomy has to offer.” (Pippa Goldschmidt, BBC Sky at night magazine, Issue 130, 2016)