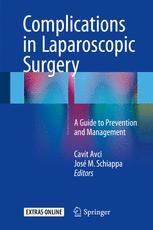 A Guide to Prevention and Management

This book is a detailed guide to the intra- and postoperative complications that may arise during the most frequently used laparoscopic techniques, with explanation of how and at what point in time they may arise, what can be done to avoid them, and how to deal with them if they do occur. Individual chapters, each written by an expert in the area, focus on the complications associated with the creation of pneumoperitoneum, laparoscopic cholecystectomy, laparoscopic management of gastroesophageal reflux disease, colorectal laparoscopic surgery, minimally invasive spleen surgery, and laparoscopic hernia repair (TAPP and TEP). Attention is drawn to useful tips and tricks and to the most critical points in surgical procedures, with a view to optimizing performance of techniques and avoiding pitfalls and complications. The concise, didactic text is enriched with informative drawings and photos and also with short video clips, available to the reader online, that will aid understanding. The book will be of value both for surgical residents and for more experienced surgeons.

Cavit Avci is Professor Emeritus (since 1990) in general surgery. He is contractual teacher, since 1986 at the "School of Surgery, University Pierre et Marie Curie, Paris VI". He is the leader of initiation for laparoscopic surgery in Turkey; founding president of the Turkish Society of Endoscopic Laparoscopic Surgery (ELCD), creator and chief editor of the Periodique Journal of the ELCD, founding director of the only videoscopic surgery school in Turkey, in Istanbul University and has been the president of the biannual national congress of endoscopic laparoscopic surgery since 1990-91. He is the chief editor of the "Videoscopic Surgery" (in Turkish Textbook-2006), and also of three volumes of "Vidéo Atlas Chirurgie Herniaire" (Springer-Verlag France, Paris 2010), the author of chapter "Teletraining in Minimal Access Surgery "in book; Training in Minimal Access Surgery (Springer-in press, 2015). Tele training and tele education are its principal occupations since some years. He is the founding director, and currently consultant of the ISTEM (Continuing Medical Education and Training Centre of Istanbul University), director of the Turkish Telemedicine Project, board member of ESTeH (European Society of Telemedicine and e Health) and responsible of distance education of the European School of Laparoscopic Surgery in Brussels. He is a member of many different national-international scientific societies, honorary member of the AFC (French Association of Surgery), member of the French Academy of Surgery, member of the French Academy of Medicine, member and former President of MMESA (Mediterranean and Middle Eastern Endoscopic Surgery Association ), member of EAES (European Association for Endoscopic Surgery).
Professor José M. Schiappa completed his specialisation in General Surgery in 1976 and trained in London (St. James’s Hospital and St. George’s Hide Park Corner, Lord Smith of Marlow – Sir Rodney Smith - and Mr. Michael Knight / Royal

Free Hospital, Prof. Hobbs), Paris, Bordeaux, and Pittsburgh. He was longstanding Chief of Surgery before retiring to private practice in 2005, and is considered one of the pioneers of laparoscopic surgery in Portugal, as well as the person responsible for the introduction of several surgical techniques in the country [transanal endoscopic microsurgery (TEM), intraoperative ultrasonography, needlescopy, surgical choledoscopy]. Dr. Schiappa has competence in the management of healthcare institutions. His main fields of activity are abdominal and digestive surgery, focusing on hepatobiliary and pancreatic surgery, colorectal surgery (treatment by TEM), hernia surgery, laparoscopic surgery, and intraoperative ultrasonography for surgeons. José M Schiappa has been and is board and committee member of a number of Portuguese and international scientific societies and a Fellow of the American College of Surgeons. He is certified by the American College of Surgery as instructor for Ultrasonography for surgeons in the United States and is an honorary member of seven international surgical societies. Dr. Schiappa has an Honorary PhD, has been Editor-in-Chief of Revista Portuguesa de Cirurgia, being now Emeritus Editor, and has published more than 50 articles and book chapters in national and international journals and books. He has also delivered more than 300 lectures and presentations and has organized more than 100 congresses, scientific events, and practical and hands-on courses.
Show all