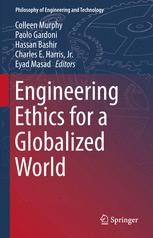 Engineering Ethics for a Globalized World

This volume identifies, discusses and addresses the wide array of ethical issues that have emerged for engineers due to the rise of a global economy. To date, there has been no systematic treatment of the particular challenges globalization poses for engineering ethics standards and education. This volume concentrates on precisely this challenge. Scholars and practitioners from diverse national and professional backgrounds discuss the ethical issues emerging from the inherent symbiotic relationship between the engineering profession and globalization. Through their discussions a deeper and more complete understanding of the precise ways in which globalization impacts the formulation and justification of ethical standards in engineering as well as the curriculum and pedagogy of engineering ethics education emerges.

The world today is witnessing an unprecedented demand for engineers and other science and technology professionals with advanced degrees due to both the off-shoring of western jobs and the rapid development of non-Western countries. The current flow of technology and professionals is from the West to the rest of the world. Professional practices followed by Western (or Western-trained) engineers are often based on presuppositions which can be in fundamental disagreement with the viewpoints of non-Westerners. A successful engineering solution cannot be simply technically sound, but also must account for cultural, social and religious constraints. For these reasons, existing Western standards cannot simply be exported to other countries.

Colleen Murphy is an Associate Professor of Law and Philosophy and Director of the Women and Gender in Global Perspectives Program at the University of Illinois at Urbana-Champaign.  Her research focuses on engineering ethics, the ethics of risk and on transitional justice in post-conflict societies.  She is the author of A Moral Theory of Political Reconciliation (Cambridge University Press).  Professor Murphy was a Laurance S. Rockefeller Visiting Faculty Fellow at the Princeton University Center for Human Values. Her research has received financial support from the National Science Foundation, the National Endowment for the Humanities, and the Qatar National Research Fund.

Paolo Gardoni is a Professor in the Department of Civil and Environmental Engineering at the University of Illinois at Urbana-Champaign.  His research focuses on the development and use of probabilistic methods to model the impact of natural and human-made hazards on interdependent structural and infrastructural systems.  He has been working on several multidisciplinary projects encompassing different areas including engineering, public policy, and ethics.  Professor Gardoni is the director of the Mid-America Earthquake (MAE) Center, established in 1997 by the National Science Foundation as one of three national earthquake engineering research centers.  He is also the associate director of the Community Resilience Center of Excellence funded by the National Institute of Standards and Technology (NIST).

Hassan Bashir is Associate Professor of Political Science at Texas A&M University at Qatar. His areas of research interest include Political Theory, Non-Western political thought and moral dimensions of globalization. His recent work focuses on inter-cultural political theory, history of political thought, Asian Politics and non-state actors in international relations. Dr. Bashir is the author of Europe and the Eastern Other: Comparative Perspectives on Politics, Religion and Culture before the Enlightenment (Lexington Books - 2013). He is also the editor of Co-existing in a Globalized World: Key Themes in Inter-professional Ethics (Lexington Books -2013) and Global Citizenship and Multiculturalism: Political, Cultural and Ethical Perspectives (Forthcoming 2015). Dr. Bashir is the Founding Director of The initiative in Professional Ethics at Texas A&M University - Qatar.

Charles E. (Ed) Harris, Jr. is a former Professor of Philosophy and former holder of the Sue and Harry Bovay Professorship in the History and Ethics of Professional Engineering at Texas A&M University. His specialty is applied and professional ethics. He and his co-authors have published a textbook in engineering ethics. He has also published a textbook in applied ethics and numerous articles in professional and applied ethics.