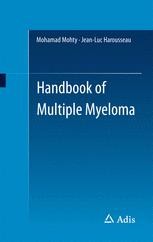 This handbook is an in-depth and comprehensive guide to the pathophysiology, diagnosis, staging, treatment and management of patients with multiple myeloma. The Handbook was commissioned to address an unmet need for a book of this kind in the myeloma field and to provide busy healthcare professionals with an informative and educational review of the current and emerging treatment recommendations for multiple myeloma. Myeloma is a type of bone marrow cancer arising from plasma cells and is the second most common form of bone marrow cancer, but represents just 1% of all cancers. The causes of myeloma are not fully understood but it is thought to be caused by an interaction of both genetic and environmental factors. This Handbook discusses these issues as well the latest developments in the field and will be an invaluable source of topical information for all healthcare professionals with an interest in multiple myeloma.

Mohamad Mohty
Mohamad Mohty is Professor of Hematology and head of the Hematology and cellular therapy Department at the Saint-Antoine Hospital and University Pierre & Marie Curie (Paris, France). Professor Mohty obtained his medical degree from the University of Montpellier, France and his PhD from the University of Marseille, France. Before moving to Paris, he was head of the Transplant Program at the University-Hospital of Nantes, France. He also undertook post-doctoral work at the Hematology Department, Imperial College, Hammersmith Hospital, London, UK. Professor Mohty’s translational research activity is focused on the pathophysiology of graft-vs-host disease and the immunobiology of normal and pathological antigen-presenting cells, especially the impact of novel immunomodulatory agents such as IMiDs and hypomethylating agents. He has a special clinical focus on the development of reduced-toxicity conditioning regimens, immunotherapy and different aspects of therapy of multiple myeloma. Professor Mohty is chairman of the Acute Leukemia Working Party (ALWP) and president-elect of the European Group for Blood and Marrow Transplantation (EBMT).He serves on the board of the EBMT and the “Intergroupe Francophone du Myelome” (IFM). He is a member of the American Society of Hematology, American Society for Clinical Oncology, American Society for Blood and Marrow Transplantation, European Hematology Association, International Society for Experimental Hematology and EBMT. Professor Mohty has published more than 210 peer-reviewed articles in the field of stem cell transplantation, leukemia and myeloma, in different hematology and immunology journals. He also serves as an Associate Editor for Leukemia, Bone Marrow Transplantation, European Journal of Haematology and Blood Cancer Journal, as a member of the editorial board of Haematologica and as a regular reviewer in different immunology, hematology and cancer journals such as Blood and The Lancet.

Jean-Luc Harousseau is professor of hematology at the University of Nantes, France. He has been head of the Department of Clinical Haematology for 24 years and is now director of the Cancer Center René Gauducheau and president of the Institut du Cancer Nantes Atlantique at Nantes.

Professor Harousseau is a member of the Scientific Advisory Board of the French National Cancer Institute and president of the Clinical Research in Oncology National Committee. He was a founding member of the Groupe Ouest-Est Leucémies Aigues et Maladies du Sang and of the Intergroupe Français du Myélome and is currently president of this internationally renowned cooperative group. In addition, Professor Harousseau is a member of the European Haematology Association, the European Group for Blood and Marrow Transplantation, the American Society of Hematology and the American Society of Clinical Oncology, as well as the Scientific Advisory Board of Multiple Myeloma Research Foundation and the International Myeloma Foundation. Professor Harousseau has contributed to more than 400 peer-reviewed publications. His fields of interest are therapy of acute myeloid leukemia and multiple myeloma.
Show all