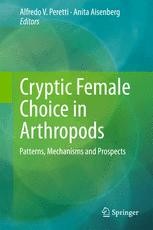 This timely book revisits cryptic female choice in arthropods, gathering detailed contributions from around the world to address key behavioral, ecological and evolutionary questions. The reader will find a critical summary of major breakthroughs in taxon-oriented chapters that offer many new perspectives and cases to explore and in many cases unpublished data. Many groups of arthropods such as spiders, harvestmen, flies, moths, crickets, earwigs, beetles, eusocial insects, shrimp and crabs are discussed.

Sexual selection is currently the focus of numerous and controversial theoretical and experimental studies. Selection in mating and post-mating patterns can be shaped by several different mechanisms, including sperm competition, extreme sexual conflict and cryptic female choice. Discrimination among males during or after copulation is called cryptic female choice because it occurs after intromission, the event that was formerly used as the definitive criterion of male reproductive success and is therefore usually difficult to detect and confirm. Because it sequentially follows intra- and intersexual interactions that occur before copulation, cryptic female choice has the power to alter or negate precopulatory sexual selection. However, though female roles in biasing male paternity after copulation have been proposed for a number of species distributed in many animal groups, cryptic female choice continues to be often underestimated. Furthermore, in recent years the concept of sexual conflict has been frequently misused, linking sexual selection by female choice irrevocably and exclusively with sexually antagonistic co-evolution, without exploring other alternatives.

The book offers an essential source of information on how two fields, selective cooperation and individual sex interests, work together in the context of cryptic female choice in nature, using arthropods as model organisms. It is bound to spark valuable discussions among scientists working in evolutionary biology across the world, motivating new generations to unveil the astonishing secrets of sexual biology throughout the animal kingdom.

Anita Aisenberg is Assistant Professor of the Laboratorio of Etología, Ecología y Evolución, of the Instituto de Investigaciones Biológicas Clemente Estable, Montevideo, Uruguay and she is member of the Sistema Nacional de Investigadores (ANII) and the Programa de Desarrollo de Ciencias Básicas (PEDECIBA), Uruguay. Since 2002 she has been working on spider behavior. Her main interests are related to sexual selection, reproductive behavior and evolution of sex roles.

“Peretti and Aisenberg have assembled an all-star cast of biologists to pen chapters in this work. … Students looking for puzzles to solve for their dissertation will find Peretti and Aisenberg’s book inspirational.” (Clint D. Kelly, The Quarterly Review of Biology, Vol. 91, December, 2016)