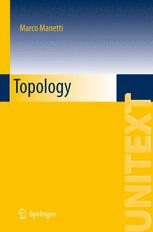 This is an introductory textbook on general and algebraic topology, aimed at anyone with a basic knowledge of calculus and linear algebra. It provides full proofs and includes many examples and exercises.

The covered topics include: set theory and cardinal arithmetic; axiom of choice and Zorn's lemma; topological spaces and continuous functions; connectedness and compactness; Alexandrov compactification; quotient topologies; countability and separation axioms; prebasis and Alexander's theorem; the Tychonoff theorem and paracompactness; complete metric spaces and function spaces; Baire spaces; homotopy of maps; the fundamental group; the van Kampen theorem; covering spaces; Brouwer and Borsuk's theorems; free groups and free product of groups; and basic category theory. While it is very concrete at the beginning, abstract concepts are gradually introduced. It is suitable for anyone needing a basic, comprehensive introduction to general and algebraic topology and its applications.

“Manetti Strives to give the reader intuition about topology. … I would recommend this book to the topology instructor who wants to try something a bit different, or to the student who would like to learn topology from an engaging and challenging text.” (Gary Gruenhage, Mathematical Reviews, May, 2016)

“Manetti devotes roughly equal space to general topology and to algebraic topology … . Reader ‘studying on this book’ will encounter full proofs of most of the theorems presented; illuminating figures and illustrations; some 500 or so exercises to be solved … . Many of the chapters close with a brief list of relevant references. Summing Up: Recommended. Upper-division undergraduates; graduate students.” (F. E. J. Linton, Choice, Vol.53 (5), January, 2016)

“This is a textbook in point-set and introductory algebraic topology, intended for an audience of upper-level undergraduates. … this is a solid entry in the undergraduate-topology textbook market, and anybody teaching a course in the subject should take a look at it.” (Mark Hunacek, MAA Reviews, July, 2015)

“This excellent textbook on the basic principles of topology stands out by its great clarity, precision, elegance, and versality. The presentation of the material is carefully thought out, concise and always straight-to-the point … . No doubt, the current English translation of the book must be seen as an utmost valuable enrichment of the international textbook literature in the field.” (Werner Kleinert, zbMATH 1322.54001, 2015)