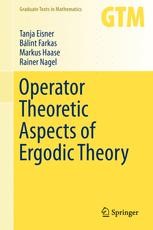 Stunning recent results by Host–Kra, Green–Tao, and others, highlight the timeliness of this systematic introduction to classical ergodic theory using the tools of operator theory. Assuming no prior exposure to ergodic theory, this book provides a modern foundation for introductory courses on ergodic theory, especially for students or researchers with an interest in functional analysis. While basic analytic notions and results are reviewed in several appendices, more advanced operator theoretic topics are developed in detail, even beyond their immediate connection with ergodic theory. As a consequence, the book is also suitable for advanced or special-topic courses on functional analysis with applications to ergodic theory.
Topics include:
•   an intuitive introduction to ergodic theory
•   an introduction to the basic notions, constructions, and standard examples of topological dynamical systems
•   Koopman operators, Banach lattices, lattice and algebra homomorphisms, and the Gelfand–Naimark theorem
•   measure-preserving dynamical systems
•   von Neumann’s Mean Ergodic Theorem and Birkhoff’s Pointwise Ergodic Theorem
•   strongly and weakly mixing systems
•   an examination of notions of isomorphism for measure-preserving systems
•   Markov operators, and the related concept of a factor of a measure preserving system
•   compact groups and semigroups, and a powerful tool in their study, the Jacobs–de Leeuw–Glicksberg decomposition
•   an introduction to the spectral theory of dynamical systems, the theorems of Furstenberg and Weiss on multiple recurrence, and applications of dynamical systems to combinatorics (theorems of van der Waerden, Gallai,and Hindman, Furstenberg’s Correspondence Principle, theorems of Roth and Furstenberg–Sárközy)
Beyond its use in the classroom, Operator Theoretic Aspects of Ergodic Theory can serve as a valuable foundation for doing research at the intersection of ergodic theory and operator theory

“This book can serve as a good introduction to an active research area. Each chapter ends with a nice list of exercises. At the end of the book complementary material can be found on measure theory, functional analysis, operator theory, the Riesz representation theorem, and more. This makes the book self-contained. The book has the potential to become a basic reference in this field.” (Idris Assani, Mathematical Reviews, January, 2017)