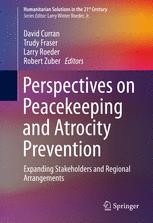 Perspectives on Peacekeeping and Atrocity Prevention

The current challenges and potential future of peacekeeping in an increasingly complex world take center stage in this far-reaching collection.

Contributors advance a nuanced picture of post-conflict environments across different areas of the globe while considering possible deployments of peacekeeping, traditional military and UN forces in semi-autonomous complementary roles. Longstanding debate topics such as the need for a standing UN army and the field implementation of global right-to-protect concepts are discussed, as are emerging ideas in civilian protection, atrocity prevention and balancing triage operations with long-term peacebuilding efforts. Other dispatches chronicle key issues and concerns regarding peacekeeping operations in Brazil, China and diverse regions of Africa.

Multiple viewpoints, a global scope and real-world clarity make Perspectives on Peacekeeping and Atrocity Prevention an invaluable resource to advance the work of humanitarians, criminologists and students of and professionals in international relations.

"This collection of articles effectively points to the challenges, complexities and sensitivities of preventing and halting mass atrocity crimes in part through the use of UN peacekeeping operations. The volume also inspires further efforts, including the integration of new and younger stakeholders, to mitigate massive human rights

crimes and fully implement the Responsibility to Protect."

Chair, Budapest Centre for the International Prevention of Genocide and Mass Atrocities

“In a refreshing and engaging manner, this edited volume represents a much-needed contribution to the debate on how best to address current security threats given the limitations and the possibilities of peacekeeping and atrocity prevention. A compelling feature of the book is its exploration of often-neglected stakeholder perspectives alongside first-hand knowledge of the UN system and astute academic observations of key peacekeeping concepts, mandates and practices. Each chapter’s concluding recommendations invite scholars and policy makers to critically interrogate their own beliefs, assumptions and preferred solutions for keeping the peace and preventing mass atrocity violence.”

Professor in Peace and Development Studies, School of Global Studies

David Curran, PhD, is a Research Fellow at the Centre for Trust, Peace and Social Relations, Coventry University. His primary research interest is in developments in United Nations (UN) peacekeeping. Since completing his PhD at the Department of Peace Studies, University of Bradford, David has undertaken research into a range of topic areas including the role of conflict resolution in training programs for military peacekeepers; the Protection of Civilians in UN Peacekeeping; the evolution of rapid-reaction peacekeeping and peacebuilding forces such as the African Union standby brigades, EU battle groups; and the potential of specialized UN rapid reaction capabilities.

Trudy Fraser, PhD, was most recently a Postdoctoral Research Fellow with joint affiliation at the United Nations University (UNU) in Tokyo, Japan, and the University of Tokyo. Her work examines the efficacy of the United Nations in meeting the challenges of contemporary human security. She is the author of Maintaining Peace and Security? The United Nations in a Changing World (Palgrave Macmillan 2014) and the co-editor of The Security Council as Global Legislator with Vesselin Popovski (Routledge 2014). She received a PhD in international relations from the University of St Andrews in Scotland, UK, in 2011.

Larry Roeder is a former Policy Adviser on Disaster Management, US Department of State, working on both conflicts and natural disasters.  He was also a multilateral negotiator on national security technologies and a professional peacekeeper, serving as a Civilian Observer in the Multinational Forces and Observers (MFO), Sinai, Egypt.  In addition, he served as Executive Director of the Global Disaster Information Network (a project of Vice President Gore), Senior Editor for Climate Caucus Network and UN Affairs Director, (WSPA) where he focused on the impact of climate and conflict on sustainable development issues as

they related to livestock and farmers.  He is Series Editor of the Humanitarian Solutions in the 21st Century series with Springer and the author of Diplomacy and Negotiation for Humanitarian NGOs (Springer 2013).

Robert  Zuber, PhD, is director of UN-based Global Action to Prevent War and the Project for a UN Emergency Peace Service. He also serves as consultant, adviser or board member to a wide variety of non-profit, policy and educational organizations, including Green Map System, Our Humanity in the Balance, and the Paris-based human rights organization FIACAT. Based in Harlem and educated at Yale and Columbia Universities, he has written and spoken extensively on diverse human security issues and has organized workshops and conferences in over 25 countries on topics from small arms proliferation and civilian protection to women's participation in peace processes and peacekeeping reform.