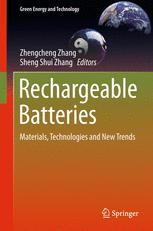 This book updates the latest advancements in new chemistries, novel materials and system integration of rechargeable batteries, including lithium-ion batteries and batteries beyond lithium-ion and addresses where the research is advancing in the near future in a brief and concise manner. The book is intended for a wide range of readers from undergraduates, postgraduates to senior scientists and engineers. In order to update the latest status of rechargeable batteries and predict near research trend, we plan to invite the world leading researchers who are presently working in the field to write each chapter of the book. The book covers not only lithium-ion batteries but also other batteries beyond lithium-ion, such as lithium-air, lithium-sulfur, sodium-ion, sodium-sulfur, magnesium-ion and liquid flow batteries.

Dr. Zhengcheng Zhang: A chemist and a team lead at the Electrochemical Energy Storage Theme, Argonne National Laboratory (ANL) of U.S. Department of Energy. He received Ph.D. degree in polymer chemistry from the Institute of Chemistry, Chinese Academy of Sciences in 2000. Prior to ANL, He spent seven years as a senior scientist in the academia and battery industry in his early career. Dr. Zhang’s current research is focused on the technology innovation for energy storage devices including Li-metal, Li-ion and new battery chemistries beyond Li-ion for PHEV/EV applications. Dr. Zhang has authored and co-authored 60 scientific papers in the peer-review journals including Advanced Functional Materials, Chemistry of Materials, Energy and Environmental Sciences, Chemical Communications, Journal of Physical Chemistry and 30 patents/invention applications in the area of high voltage electrolyte, solid electrolyte interphase (SEI) passivation additives, and redox shuttle additives, thermally stable separator, UV curing cross-linked polymer binder, stabilized lithium metal powder anode and organic polymer cathode for lithium ion battery. A series of potential-tuneable redox shuttle additives has been scaled up for industrial validation due to its prolonged overcharge protection and contributed to a book chapter on this topic. His new technology of the silicon-based electrolyte has won the 2005 R&D 100 Award. His recent research in the energy storage is expanded to the high energy density organic cathode materials and batteries beyond Li-ion including Li-air battery and Li-sulfur battery. Dr. Zhang is well recognized in the field and has been invited to give talks at a number of national and international conferences/symposiums.

Dr. Sheng S. Zhang: A research chemist in Electrochemistry Branch of U.S. Army Research Laboratory. He received Ph.D. in physical chemistry from University of Science and Technology Beijing, China, in 1993. After four years

experiences in academy and industry, he joined ARL in 1997. His research activities are focused on the advanced materials for electrochemical energy storage and conversion devices, including rechargeable lithium-ion batteries, lithium batteries, metal-air batteries and electrochemical capacitors. Since 2008, his research has moved to high energy density batteries beyond lithium-ion, including Li/CFx battery, Li-air battery, and lithium-sulfur battery. In his research areas, Dr. Zhang has authored 119 peer-referred journal papers, owned 22 patents/applications, and edited a review book. His publications have been frequently ranked as the "Top 25 Hottest Articles" by Elsevier journals such as J. Power Sources and Electrochim. Acta, and have received an h-index of 38 with over 4100 citations. Dr. Zhang is presently a host editor for the special issue, titled "Li-ion Batteries and Energy Storage Devices", of Energies.
Show all