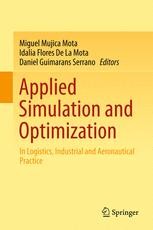 In Logistics, Industrial and Aeronautical Practice

Presenting techniques, case-studies and methodologies that combine the use of simulation approaches with optimization techniques for facing problems in manufacturing, logistics, or aeronautical problems, this book provides solutions to common industrial problems in several fields, which range from manufacturing to aviation problems, where the common denominator is the combination of simulation’s flexibility with optimization techniques’ robustness.

Providing readers with a comprehensive guide to tackle similar issues in industrial environments, this text explores novel ways to face industrial problems through hybrid approaches (simulation-optimization) that benefit from the advantages of both paradigms, in order to give solutions to important problems in service industry, production processes, or supply chains, such as scheduling, routing problems and resource allocations, among others.

Dr. Mujica Mota has given several courses in modelling, simulation methodologies and optimization in different countries for industrial and academic audiences. He has participated in several international projects in which simulation and optimization were the key factors for the success of them.

Dr. Mujica has been awarded with the Level C of the Mexican Council of Science and Technology where he also participates as a scientific evaluator for Latin America. He is the co-author of two books and numerous papers on simulation, operations research, aviation, manufacturing and logistics. His research interests lie in the use of simulation, modelling formalisms and heuristics for the optimization and performance analysis of aeronautical operations, manufacture and logistics.

Idalia Flores-De La Mota is a mathematician from the Faculty of Sciences of the National Autonomous University of Mexico (UNAM) and holds a Masters and PhD in Operations Research (1998) from the Faculty of Engineering at UNAM. Since 1987, she has been a part of the academic staff of the Faculty of Engineering and has published books and articles in numerous international journals. She has been arbiter of journals including: Simulation, JART, Journal of Accounting and Administration UNAM, Engineering (Chile), Computing Reviews online and the Latin American Journal of Automatic Control. She has organized conference tracks at the international conference I3M (International Multidisciplinary Modeling & Simulation Multiconference) on 5 occasions. In 2012 and 2014 she was awarded a Special Professorship by the Technical Council of the UNAM Faculty of Engineering in recognition of her performance as a professor. She belongs to the Institute for Operations Research and the Management Science, and Director of McLeod Center for Simulation in Mexico.

Daniel Guimarans is a researcher at the Optimisation Research Group of NICTA, Australia. Previously, he was an assistant lecturer at the Autonomous University of Barcelona. He holds a PhD and a MSc in Industrial Computer Science and Advanced Production Techniques from the Autonomous University of Barcelona, both obtained with the highest honours. His research is mainly focused on the hybridisation of optimisation methods, and its combination with simulation techniques. Most of his work is aimed at solving transportation, aviation, manufacturing and logistics problems.

Dr. Guimarans has published numerous articles in journals and international conferences. He is also co-author of several book chapters. Some of his developments have been licensed and are currently used commercially to solve large-scale road transportation problems. He has also given courses and invited talks in modelling, optimisation and hybridisation for different audiences.

Dr. Guimarans is currently an active collaborator in several international projects and research networks focused on the use of optimisation and simulation techniques for solving transportation and production problems.