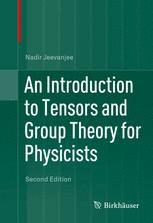 An Introduction to Tensors and Group Theory for Physicists

The second edition of this highly praised textbook provides an introduction to tensors, group theory, and their applications in classical and quantum physics. Both intuitive and rigorous, it aims to demystify tensors by giving the slightly more abstract but conceptually much clearer definition found in the math literature, and then connects this formulation to the component formalism of physics calculations. New pedagogical features, such as new illustrations, tables, and boxed sections, as well as additional “invitation” sections that provide accessible introductions to new material, offer increased visual engagement, clarity, and motivation for students.

Part I begins with linear algebraic foundations, follows with the modern component-free definition of tensors, and concludes with applications to physics through the use of tensor products. Part II introduces group theory, including abstract groups and Lie groups and their associated Lie algebras, then intertwines this material with that of Part I by introducing representation theory.  Examples and exercises are provided in each chapter for good practice in applying the presented material and techniques.

Prerequisites for this text include the standard lower-division mathematics and physics courses, though extensive references are provided for the motivated student who has not yet had these.  Advanced undergraduate and beginning graduate students in physics and applied mathematics will find this textbook to be a clear, concise, and engaging introduction to tensors and groups.

Reviews of the First Edition

“[P]hysicist Nadir Jeevanjee has produced a masterly book that will help other physicists understand those subjects [tensors and groups] as mathematicians understand them… From the first pages, Jeevanjee shows amazing skill in finding fresh, compelling words to bring forward the insight that animates the modern mathematical view…[W]ith compelling force and clarity, he provides many carefully worked-out examples and well-chosen specific problems… Jeevanjee’s clear and forceful writing presents familiar cases with a freshness that will draw in and reassure even a fearful student.  [This] is a masterpiece of exposition and explanation that would win credit for even a seasoned author.”

"Jeevanjee’s [text] is a valuable piece of work on several counts, including its express pedagogical service rendered to fledgling physicists and the fact that it does indeed give pure mathematicians a way to come to terms with what physicists are saying with the same words we use, but with an ostensibly different meaning.  The book is very easy to read, very user-friendly, full of examples...and exercises, and will do the job the author wants it to do with style.”