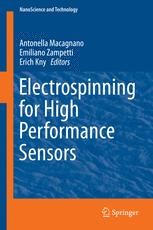 This book aims to present the different aspects of electrospinning for designing and fabricating high performing materials for sensors applied in gaseous and liquid environments. Since electrospinning is a versatile and inexpensive manufacturing technology, the book emphasizes the industrial applications perspective. The volume is an edited collection of the most recent and encouraging results concerning advanced nanostructured (bio) sensors. The feats achieved by these sensors range from high sensitivity to extreme operating conditions and satisfy a wide range of requirements. Most of the contributions in this book come from First International Workshop on Electrospinning for High Performance Sensing (EHPS2014) that was held in Rome in 2014, as part of the European COST Action MP1206 Electrospun Nanofibres for bio inspired composite materials and innovative industrial applications.

Antonella Macagnano, is a research scientist at the National Research Council (2001-, CNR). She started her activity at the Institute for Microelectronics and Microsystems (IMM-Rome, Italy) until 2013 when she moved to the Institute of Atmospheric Pollutant Research (IIA) where she has been leading an action called “High-Performance Sensors and Sensing Systems for Monitoring Air Quality and Environment”. She devoted most of her research activity to design and develop sensors and sensor arrays, with different principles of transduction, based on biomimetics and bioinspired artificial sensing membranes. She received the Biological Science’s Degree in 1993 at Lecce University and the Professional’s Degree in 1994. Since 1996 she has been cooperating with many National and International Institutions for designing and studying novel sensors (gravimetric, conductive, capacitive) and sensing strategies for environmental and biomedical applications, within several projects (among them, seven as a leader). She has also been involved in studying and developing novel and integrated systems to detect organic substances and dusts in space explorations. More recently, she has been focusing on the sensing performances of organics, inorganics and composite nanofibers obtained through the implementation of the electrospinning technology. She is member of the European COST Action (MP1206), which is aiming to create a European multidisciplinary knowledge platform on electrospinning of nanofibres to facilitate their rapid development and applications. She is author of several international papers on the topic, book contributions as well as talks and invited talks in international meetings. She was the Chair of the International Workshop in Rome (2014) titled “Electrospinning for High Performance Sensing”.

Erich Kny, founder and director of KEMYK Consulting (2012-, Vienna, Austria), studied Chemistry and Physics at Vienna University. After some years teaching at the Department of Physical Chemistry of the University of Vienna he spent two years as a Postdoc at the Materials Research Centre at the University of Missouri, Rolla, USA doing research in Plasma-polymerization and surface analysis. After returning to Austria he was employed at the Metallwerk Plansee in Austria for the next ten years where he did research and development work in powder metallurgy, refractory metals, hard metals, refractory metals components for fusion research and superconductor development. After this industrial experience he became head of the Engineering Department (comprising the four institutes dealing with Materials research, Automation, Process technology and Mechanical Engineering) at the Austrian Research Centre. He held this position for 17 years. After retirement from the Austrian Research Centre he founded his own consulting company KEMYK in 2011. He was chair of the COST Action MP701 on Polymer Nanocomposites and is presently chair of the COST Action MP1206 on Electrospinning. He published well over 100 publications, 3 book contributions, several patents and was lately the editor of the conference symposium proceedings at the EMRS 2009 on Polymer Nanocomposites.

Emiliano Zampetti, is research scientist (non-permanent position) at the Institute of Atmospheric Pollutant Research (IIA-CNR) (Rome, Italy, 2014-) of the National Research Council. He received the master degree in Electronics Engineering in 2002 and the PhD on Engineering of Sensorial and Learning Systems in 2007 from University of Tor Vergata, in Rome. He cooperated with several Institutions within International and National Projects and worked as a researcher at the Institute of Microelectronics and Microsystems (IMM-CNR) (2008-2013). His research interests are concerned with the design and development of the electronic circuits for electronic nose systems, electronic readout circuits for gas sensor, customized designs of transducers and integrated equipment for sensing gas and volatile organic compounds, electrospinning apparatus for nanotechnology applications and bio-electronic noise in cells and neurons. He is author of dozens international and national papers as well as international talks.