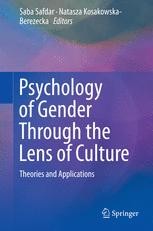 Psychology of Gender Through the Lens of Culture

This unique collection brings a rarely-seen indigenous and global perspective to the study of gender and psychology. Within these chapters, researchers who live and work in the countries and cultures they study examine gender-based norms, values, expression, and relations across diverse Western and non-Western societies. Familiar as well as less-covered locations and topics are analyzed, including China, New Zealand, Israel, Turkey, Central America, the experience of refugees, and gendered health inequities across Africa such as in the treatment of persons with HIV. Included, too, are examples of culturally appropriate interventions to address disparities, and data on the extent to which these steps toward equality are working.

Structurally, the volume is divided into three sections. The first two parts of the book take readers on a journey to different regions of the world to illustrate the most recent trends in research concerning gender issues, and then outline present implications and future prospects for the psychological analysis of both gender & culture. The third section of the book has an applied perspective and focuses on the cultural norms and values reinforcing gender equality as well as cultural and social barriers to them.

A sampling of the topics covered:

Psychology of Gender Through the Lens of Culture is a milestone toward core human rights and goals worldwide, and a critical resource for psychologists, sociologists, anthropologists, gender studies researchers, public policy makers and all those interested in promoting gender equality throughout the world.