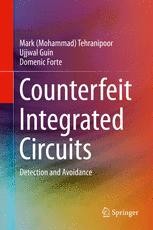 This timely and exhaustive study offers a much-needed examination of the scope and consequences of the electronic counterfeit trade.  The authors describe a variety of shortcomings and vulnerabilities in the electronic component supply chain, which can result in counterfeit integrated circuits (ICs).  Not only does this book provide an assessment of the current counterfeiting problems facing both the public and private sectors, it also offers practical, real-world solutions for combatting this substantial threat.

·      Helps beginners and practitioners in the field by providing a comprehensive background on the counterfeiting problem;

·      Presents innovative taxonomies for counterfeit types, test methods, and counterfeit defects, which allows for a detailed analysis of counterfeiting and its mitigation;

·      Offers pragmatic and practice-oriented, realistic solutions to counterfeit IC detection and avoidance, for industry and government.

Mark (Mohammad) Tehranipoor is currently the Charles H. Knapp Associate Professor of Electrical and Computer Engineering Department at the University of Connecticut.

His current research projects include: computer-aided design and test for CMOS VLSI designs, hardware security and trust, counterfeit IC detection and prevention, and reliable systems design at nanoscale. Prof. Tehranipoor has published over 200 journal articles and refereed conference papers and has given more than 125 invited talks and keynote addresses since 2006. In addition, he has published five books and ten book chapters. His projects are sponsored by both the industry (SRC, Texas Instruments, Freescale, Comcast, Honeywell, LSI, Mentor Graphics, Cisco, Qualcomm, MediaTeck, etc.) and Government (NSF, ARO, MDA, DOD, DOE, etc.).

Prof. Tehranipoor is a Senior Member of the IEEE, Golden Core Member of IEEE Computer Society, and Member of ACM and ACM SIGDA.

“In this book, the authors present an overall description of the physical and electrical techniques that are used in the state of the art. Those techniques are proven to be useful in the practical detection and avoidance of counterfeit ICs. … usable as a handbook for engineers and experts in this field.” (Zheng Gong, computing Reviews, August, 2015)