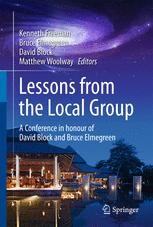 Lessons from the Local Group

A Conference in honour of David Block and Bruce Elmegreen

Our understanding of galaxy formation comes mostly from two sources: sensitive observations at high angular resolution of the high-redshift Universe, where galaxies are observed to be forming, and detailed observations of individual stars and clouds in the Local Group, where telltale remnants from its formative time remain and similar processes operate at a low level today. The current conference focusses on key aspects of the Local Group, composed of the Milky Way, Andromeda and Triangulum Spiral Galaxies, the Large and Small Magellanic Cloud galaxies, numerous dwarf and irregular galaxies, and intergalactic gas. Topics include the halo and thick disk of the Milky Way with its first stars and stellar streams; the Milky Way bar, bulge and outer edge; interstellar dust and turbulence; star formation processes and stellar scattering in spiral arms; views through the infrared Eyes of the Spitzer Space Telescope; globular clusters; the Local Gould Belt; stellar metallicities and elemental abundances; the environment and black hole in the Milky Way nucleus; orbits of the Magellanic Clouds and galaxy dwarfs; interstellar dust and turbulence; the outer disks and halos of the Andromeda and Triangulum galaxies; ripples from a collision in Andromeda; and arcs of carbon stars in the Triangulum and intergalactic clouds.

This volume also discusses surveys of planetary nebulae, galaxy morphology at low and high redshift, cosmic evolution of star and galaxy formation and gas accretion, Lyman alpha emitting galaxies, ultra-low surface brightness imaging, and more. Readers are given a clear and comprehensive view of this wide range of topics written by specialists in each field. This is the proceedings of an International Conference at the Seychelles archipelago in May 2014, on the occasion of the 60th birthday of David Block and the millionth (base two) birthday of Bruce Elmegreen.

Prof. Ken Freeman, FRS, is the Duffield Professor of Astronomy at the Australian National University. He has been bestowed with the highest accolade of the American Astronomical Society, the Henry Russell Norris Lecture. In 2012, he was awarded the Australian Prime Minister's Prize for Science. Freeman has devoted his career to the study of galaxies, and is widely regarded as one of the founding fathers of dark matter. He has supervised 55 PhD students to date.

Dr. Bruce Elmegreen is a staff member in the Research Division of IBM. He received the 2001 Dannie Heineman Prize from the American Astronomical Society and the American Physical Society, and is a Fellow of the American Association for the Advancement of Science.

Prof. David Block is Professor of Computational and Applied Mathematics at the University of the Witwatersrand, Johannesburg, South Africa. He is the only scientist in Africa whose research has twice been featured on the cover of Nature. A recipient of the Vice-Chancellor’s Research Award, Block and his team also spearheaded the discovery and amount of cold cosmic dust in our Universe using optical and near-infrared arrays. He has been a guest investigator at many of the world’s foremost universities and observatories, including Harvard University and the European Southern Observatory. Block co-authored the book Shrouds of the Night, published by Springer, together with Ken Freeman.

Matthew Woolway is a tutor in the School of Computational & Applied Mathematics at the University of the Witwatersrand, Johannesburg. His key focus lies in the domain of image and signal processing. He is a recipient of the Colin James Young Award.