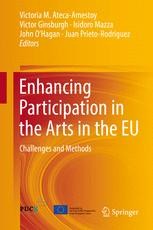 Enhancing Participation in the Arts in the EU

In this book, participation in the arts is analyzed as a substantial contributory factor to European citizenship, and also as a tool for improving individual and societal wellbeing through educational and inclusive policies. It offers an up-to-date overview of ongoing research on the measurement and analysis of, and prospects for, traditional and new forms of cultural engagement in Europe. It describes and assesses available methods and participation in the arts and seeks to determine how and to what extent the various drivers, policies and barriers matter. This publication is the final output of the work done by the members of the EU Project “Assessing effective tools to enhance cultural participation,” which brought together social scientists and cultural practitioners in joint projects, conferences and seminars, to reflect on the current situation and the challenges faced by managers of cultural and arts institutions and cultural policy makers.

Victoria is an Associate Professor at the University of the Basque Country (UPV/EHU). She served as book review editor for the Journal of Cultural Economics and is a member of the Asociación Española de Gestores de Patrimonio Cultural. She has worked in the design and management of cultural projects for private firms, professional associations and public administrations. Her research interests are cultural economics, behavioral economics and social indicators. She has published papers in international journals such as The Journal of Socio Economics, Journal of Cultural Economics, Social Indicators Research, European Journal of Operational Research, and has contributed to handbooks on the economics of leisure and on the economics of cultural heritage. She has also coordinated international and national research projects on the determinants of cultural participation , on cultural statistics and on the economic and social impact of cultural projects.

Victor Ginsburgh is Honorary Professor of Economics at Université Libre de Bruxelles, and former co-director of the European Center for Advanced Research in Economics and Statistics (ECARES). He is also a member of the Center for Operations Research and Econometrics (CORE), Université Catholique de Louvain since 1972. He was visitor at Yale University, University of Chicago, University of Virginia, University of Louvain, as well as in Marseilles, Paris, Strasbourg and Alexandria (Egypt). He wrote and edited 15 books (among which The Structure of Applied General Equilibrium, Cambridge, MA: MIT Press, 1997, with M. Keyzer, How Many Languages Do We Need, Princeton University Press, 2011 with Shlomo Weber and edited with D. Throsby the two volumes of The Handbook of the Economics of Art and Culture, Amsterdam: Elsevier, 2006, 2013). He is the author or co-author of over 200 papers on topics in applied and theoretical economics, including industrial organization, general equilibrium analysis, the economics of art, culture and languages. His work has appeared in the American Economic Review, Journal of Political Economy, Games and Economic Behavior, Journal of Economic Perspectives, Economic Journal, Journal of the European Economic Association, Empirical Studies of the Arts, Journal of Cultural Economics and Journal of Wine Economics.

John O’Hagan is Emeritus Professor of Economics, and Senior Fellow, at Trinity College Dublin, Ireland. He was President of the Association for Cultural Economics International from 1998 to 2000. He is on the scientific committee of the European Workshop in Applied Cultural Economics, with the eight workshop to be held in Krakow in 2017. He was Chair of a government-appointed group reviewing value for money in the allocation of Irish Arts Council expenditure, the Report of which was completed in September 2015. He has published widely in cultural economics, as well as on the Irish economy, including a 13th edition of his popular edited Economy of Ireland book (Palgrave London) due out in 2017.

Juan Prieto-Rodriguez is Full Professor of Economics in the University of Oviedo. His fields of specialization are cultural, public and labor economics. His main interests in cultural economics are cultural participation and cultural industries. He is the current Executive Secretary-Treasurer of ACEI. He has published more than 60 articles in applied and theoretical economics in international journals such as Economics Letters, European Journal of Operational Research, Industrial & Labor Relations Review, International Journal of Forecasting, Journal of Economic Psychology, Journal of Cultural Economics and Kyklos. He was the coordinator of PUCK.
Show all
Reviews

“The book is a valuable contribution to the field of cultural participation studies, … all the individual articles in the book are interesting, and the research is well conducted and of high quality. Therefore, I will warmly recommend the book for researchers interested in understanding the participation in arts and culture.” (Trine Bille, Journal of Cultural Economics, Vol. 43 (2), June, 2019)