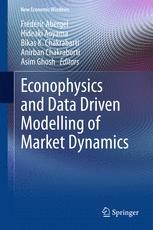 This book presents the works and research findings of physicists, economists, mathematicians, statisticians, and financial engineers who have undertaken data-driven modelling of market dynamics and other empirical studies in the field of Econophysics. During recent decades, the financial market landscape has changed dramatically with the deregulation of markets and the growing complexity of products. The ever-increasing speed and decreasing costs of computational power and networks have led to the emergence of huge databases. The availability of these data should permit the development of models that are better founded empirically, and econophysicists have accordingly been advocating that one should rely primarily on the empirical observations in order to construct models and validate them. The recent turmoil in financial markets and the 2008 crash appear to offer a strong rationale for new models and approaches. The Econophysics community accordingly has an important future role to play in market modelling. The Econophys-Kolkata VIII conference proceedings are devoted to the presentation of many such modelling efforts and address recent developments. A number of leading researchers from across the globe report on their recent work, comment on the latest issues, and review the contemporary literature.

Frédéric Abergel is Professor and Director of the Laboratory of Mathematics Applied to Systems and Director, BNP Paribas Chair of Quantitative Finance, École Centrale Paris, France. His research interests are financial markets, modelling of derivatives, and empirical properties of financial data. Since 2008 Professor Abergel has been a member of the organizing and scientific committees of the annual Financial Risks International Forum, Paris and he is also organizer of the annual econophysics conference EP-KOL, Kolkata. He is managing editor of the journal Quantitative Finance.

Hideaki Aoyama is a Professor in the Department of Physics, Graduate School of Science, Kyoto University, Japan. His research interests are theoretical physics, high-energy physics, mathematical physics, and econophysics. He is a Lifetime Member of both the American Physical Society and Sigma Xi, The Scientific Research Society. Professor Aoyama is Scientific Chief Advisor to Credit Risk Database (Tokyo) and Principal Advisor on Physical Science to the Renewable Energy Foundation (London). His previous books include Econophysics and Companies – Statistical Life and Death in Complex Business Networks (Cambridge University Press).

Bikas K. Chakrabarti is Senior Professor of Physics at the Saha Institute of Nuclear Physics, Kolkata, India and Visiting Professor of Economics, Indian Statistical Institute, Kolkata, India. Professor Chakrabarti is an elected Fellow of the Indian Academy of Sciences and the Indian National Science Academy and in 1997 received the Shanti Swarup Bhatnagar Prize from the CSIR (Council of Scientific and Industrial Research). His research interests include condensed matter physics, statistical physics, and computational physics and he is the author of more than 150 papers in refereed journals and co-author of two books.

Anirban Chakraborti is Professor in the School of Computational and Integrative Sciences, Jawaharlal Nehru University, New Delhi, India. His research focuses on statistical physics and its interdisciplinary application to problems in complex systems in economic and social sciences, and combinatorial optimization. In 2009 he received the Indian National Science Academy Young Scientist Medal. He is co-author or co-editor of seven books, including most recently Econophysics of Agent-Based Models (Springer, Italy) and Econophysics of Income and Wealth Distributions (Cambridge University Press).

Asim Ghosh is Senior Research Fellow in the Theoretical Condensed Matter Physics Division, Saha Institute of Nuclear Physics, India. He is co-editor of the books Econophysics of Systemic Risk and Network Dynamics (Springer, Italy) and Econophysics of Agent­Based Models (Springer Italy) and the author of a number of papers in peer-reviewed journals.