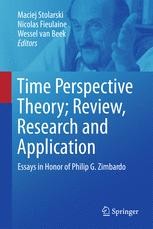 This book is about time and its powerful influence on our personal and collective daily life. It presents the most comprehensive and up-to-date overview of contemporary knowledge on temporal psychology inspired by Zimbardo's work on Time Perspective (TP). With contributions from renowned and promising researchers from all over the globe, and at the interface of social, personality, cognitive and clinical psychology, the handbook captures the breadth and depth of the field of psychological time. Time perspective, as the way people construe the past, the present and the future, is conceived and presented not only as one of the most influential dimensions in our psychological life leading to self-impairing behaviors, but also as a facet of our person that can be de-biased and supportive for well-being and happiness. Written in honor of Philip G. Zimbardo on his 80th birthday and in acknowledgement of his leading role in the field, the book contains illustrations of the countless studies and applications that his theory has stimulated, and captures the theoretical, methodological and practical pathways he opened by his prolific research.

Maciej Stolarski is currently an Assistant Professor at Faculty of Psychology, University of Warsaw, Poland, where he earned his MA and PhD degrees, both awarded with summa cum laude distinction. His scientific interests are very broad, including mutual influences between cognition and emotion, individual differences in temperament, IQ and emotional intelligence, as well as analyses of aggregate psychological features of nations. He published in renowned peer-reviewed journals, including Intelligence, Personality and Individual Differences, Journal of Happiness Studies and PLOS One, among others. His interest in Time Perspective phenomenon, as well as his collaboration with Phil Zimbardo began in 2010, after Phil’s visit at University of Warsaw. Since that time Maciej conducted numerous studies investigating TP, mainly in its relation to emotional processes. He developed and validated the DBTP, an indicator of temporal balance, increasingly used in empirical research. Currently he conducts a research program investigating genetic, familial and cultural bases of TP.

Nicolas Fieulaine is an Associate Professor of Social Psychology in the Institute of Psychology at the University of Lyon, France. He earned his BA, MA and PhD from Provence University and works with Phil Zimbardo since 7 years to develop and structure time perspective research worldwide. He was awarded with several research grants for applied studies and is

the program director of the Master of Applied Social Psychology and the University of Lyon. His earliest research interests dealt with psychological correlates of socioeconomic precariousness which he studied using quantitative and qualitative methods. His findings rapidly bring him to be interested in the social roots and psychological implications of time perspective, mainly in the fields of inequalities related to health and access to rights. He is also interested in applying psychology to social issues through action-research, field experiments or professional training. He is currently studying the role of psychological field properties on people's experiences, decisions and behaviorsWessel van Beek, Wessel van Beek studied clinical psychology at the University of Utrecht, the Netherlands and earned his PhD from the Vrije Universiteit in Amsterdam. He has been working in clinical psychology and psychiatry for 20 years. Beside his work as a psychotherapist Wessel did research on the role of time perspective and future thinking in suicidality and he developed the Future Oriented Group Training for suicidal patients. As a clinician Wessel has special interest in how past, present and future thinking are related and how they influence psychopathology. Wessel has been part of a core group of researchers working with Phil Zimbardo. He currently focuses on Prenatal Past, as a complementary time perspective, and is preparing a book on Time in Psychotherapy. Wessel is director of a small mental health care institute in The Netherlands.
Show all
Reviews

“Time Perspective Theory; Review, Research and Application: Essays in Honor of Philip G. Zimbardo is an edited book focused on the construct of time perspective. … The editors achieved their goal of creating a compendium of current research on TP and this book would be ideal for use by psychologists or psychology students interested in learning more about the construct. … The work contained in this book will likely spur more research into the psychological study of TP … .” (Erin D. Solomon, PsycCRITIQUES, Vol. 60 (29), July, 2015)