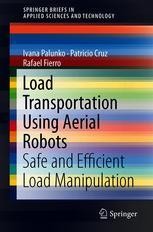 This book addresses the challenging problem of employing aerial robots to transport and manipulate loads safely and efficiently, discussing in detail the design and derivation of control algorithms based on adaptive control, optimal control, and reinforcement learning.

Rafael Fierro is a Professor at the Department of Electrical & Computer Engineering, University of New Mexico, where he has been since 2007. He received a Ph.D. degree in Electrical Engineering from the University of Texas-Arlington. Prior to joining UNM, he held a postdoctoral appointment with the GRASP Lab at the University of Pennsylvania and a faculty position with the Department of Electrical and Computer Engineering at Oklahoma State University. His research interests include cooperative control, robotic networks, hybrid systems, autonomous vehicles, and multi-agent systems. He directs the Multi-Agent, Robotics, Hybrid and Embedded Systems (MARHES) Laboratory. Rafael Fierro was the recipient of a Fulbright Scholarship, a 2004 National Science Foundation CAREER Award, and the 2008 International Society of Automation (ISA) Transactions Best Paper Award. He is currently serving as Associate Editor for the new IEEE Transactions on Control of Network Systems T-CNS.

Patricio Cruz is a research assistant in the MARHES Lab at the University of New Mexico (UNM). He is also presently enrolled as a Ph.D. student in the Electrical and Computer Engineering Department at UNM. In 2005, he received the B.S. degree in Electronics and Control Engineering from Escuela Politécnica Nacional (EPN), Quito-Ecuador. Then, he worked as design and maintenance engineer for important companies in Ecuador. During 2007, he started teaching undergraduate courses and labs at the College of Electrical and Electronics Engineering at EPN. In 2010, he was awarded a Fulbright Scholarship in the Fulbright Faculty Development Program. He obtained his M.Sc. degree in Electrical Engineering from UNM in 2012. His M.Sc. thesis focused on the design and implementation of a real-time control architecture for a multi-vehicle aerial test bed. Different publications of the MARHES research group have used this architecture for experimental validation. His research interests include heterogeneous robotic systems, rotorcraft unmanned vehicles, aerial manipulation, hybrid systems, optimal and adaptive control, cooperative control, and multi-agent coordination.

Ivana Palunko is a postdoctoral researcher at the ACROSS Center, Faculty of Electrical Engineering and Computing, University of Zagreb and is a member of the LARICS (Laboratory for Robotics and Intelligent Control Systems) research group. In 2007, she obtained a Master’s degree in Electrical Engineering, majoring in Control Systems, from the same university. She defended her Ph.D. dissertation in August 2012 at the Department of Electrical and Computer Engineering, University of New Mexico, USA. During her Ph.D. program, she worked as a research and teaching assistant in Professor Rafael Fierro’s research group MARHES (Multi-Agent, Robotics, Hybrid and Embedded Systems Laboratory). Her research mainly focuses on the modeling and control of rotorcraft UAVs, nonlinear and adaptive control, Lyapunov stability, optimal control, dynamic programming and reinforcement learning, cooperative manipulation, consensus and graph theory. These tools are applied to problems of load transportation using aerial robots and decentralized control.
Show all