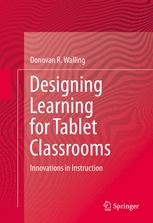 The versatile, cost-effective technology of the tablet computer has proved to be a good fit with the learning capabilities of today's students. Not surprisingly, in more and more classrooms, the tablet has replaced not only traditional print materials but the desktop computer and the laptop as well.

Designing Instruction for Tablet Classrooms makes sense of this transition, clearly showing not just how and why tablet-based learning works, but how it is likely to evolve.

Written for the non-technical reader, it balances elegant theoretical background with practical applications suitable to learning environments from kindergarten through college. A wealth of specialized topics ranges from course management and troubleshooting to creating and customizing etextbooks, from tablet use in early and remedial reading to the pros and cons of virtual field trips. And for maximum usefulness, early chapters are organized to spotlight core skills needed to negotiate the new design frontier, including:

This is proactive reading befitting a future of exciting developments in educational technology. For researchers and practitioners in this and allied fields, Designing Instruction for Tablet Classrooms offers limitless opportunities to think outside the box.

Donovan R. Walling is a writer and editorial consultant. He also is a senior consultant for the Center for Civic Education and formerly was director of publications for Phi Delta Kappa International. Prior to moving into education publishing, he was a curriculum administrator in public school districts in Wisconsin and Indiana, following a lengthy career as a classroom teacher in Wisconsin and for the U.S. Department of Defense in Germany.

Walling is the author or editor of sixteen books. Recent titles include Why Civic Education Matters; Writing for Understanding: Strategies to Increase Content Learning; Teaching Writing to Visual, Auditory, and Kinesthetic Learners; Visual Knowing: Connecting Art and Ideas Across the Curriculum; Public Education, Democracy, and the Common Good; and Virtual Schooling: Issues in the Development of E-Learning Policy. He also has contributed articles to a number of professional journals, including a six-part series on student-produced media, titled “Tech-Savvy Teaching,” for the Association for Educational Communications and Technology (AECT) journal, TechTrends. He is the co-author (with Phillip Harris) of “Policies Governing Educational Technology Practice and Research” (Chapter 50) in Handbook of Research on Educational Communications and Technology, Fourth Edition. He also edits and designs the AECT quarterly e-newsletter, iTECH DIGEST.

Walling has written monographs; contributed articles to encyclopedias; provided pre- and post-publication book reviews; contributed chapters to various books, including scholarly history; published poems in journals and anthologies; and written several produced scripts for radio and stage as well as short story fiction. His Arts in View blog, which he began in 2009, is read literally around the world, as is his other blog, Advancing Learning and Democracy, which was launched in 2012. He was a founding associate editor of the Journal of Gay and Lesbian Issues in Education, now Journal of LGBT Youth, for which he continues to serve on the editorial board.

As a speaker, Walling has presented keynote and session presentations and workshops at international, national, regional and state education conferences in the United States, Canada and Germany.

“The structure of this book makes it an appropriate resource for someone considering tablet use in the classroom or for an experienced user looking for additional ideas for innovative technology integration. … The book is written as a practical guide for the non-technical implementer and user. … I would recommend this book as a resource for anyone considering tablet computer implementation into a learning context.” (J. Ana Donaldson, Technology, Knowledge and Learning, Vol. 20, 2015)