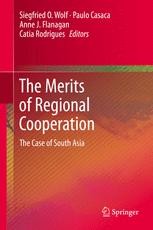 The Merits of Regional Cooperation

The Case of South Asia

This book highlights various cutting-edge topics and approaches to cooperation and regional integration in South Asia. Contributions from both South Asian and EU scholars carry the distinctive flavour of differing perspectives, in order to identify possible driving factors for regional cooperation.

The book is divided into four parts:

Peace and Stability focuses on how to combat terrorism and ideologies of hate, looks at governance in the context of cultural diversity, and examines the role of education in achieving traditional and human security;

Economic Cooperation deals with potential EU-India trade relations as well as the issue of how to transform the South Asian Association for Regional Cooperation (SAARC) into an effective and coherent economic space;

Efficient Use of Resources analyses how the region can achieve more development;

EU-South Asia relations elaborates on potential areas of cooperation between the two regions.

Dr. Siegfried O. Wolf was educated at the Institute of Political Science and South Asia Institute (SAI), both Heidelberg University. Currently he is lecturer in International Relations and Comparative Politics at SAI as well as Director of Research, South Asia Democratic Forum (SADF), a Brussels based think tank.

Paulo Casaca, Founder and Executive Director of the South Asia Democratic Forum (SADF - 2011), the Brussels-based NGO Alliance to Renew Co-operation among Humankind (ARCHumankind - 2010) and manager of the consultancy Land and Energy Renewable Systems, (LessMeansMore - 2010), Mr Casaca was an Member of the European Parliament from 1999 to 2009 and a Councillor of the Portuguese Permanent Representation from 1996 to 1999. He has lectured Economics at the University of the Azores and the University of Lisbon, been Economics Advisor to the Socialist Group in Portugal, and been a Member of the Portuguese national Parliament and the Azorean Regional Parliament. His professional career has focused on European Affairs, Economics and International Politics.

Anne J. Flanagan was educated at Trinity College Dublin where she gained an MA in Economics & Political Science. She also holds an MA in International Relations from Dublin City University where her thesis examined the international power projection of former imperialist powers in the contemporary EU context. Ms Flanagan is a Rotary GSE alumna (Japan 2009) and has worked in central government in Ireland as well as the European Parliament in Brussels and Strasbourg.

Cátia Rodrigues is a Policy Advisor in SADF. She holds a BA in Political Science and International Relations from the New University of Lisbon, with a semester abroad at The Hague University in the Netherlands, and a MA in International Conflict and Security with a focus on Human Rights from the University of Kent. Before joining SADF, Cátia was a Project Manager and ROM Coordinator at EPES Mandala Consulting, interned in the Ministry of Foreign Affairs of Portugal and in the European Parliament in Brussels. Cátia is a Junior ROM expert and has been in missions to Cape Verde, Mozambique, Guinea-Bissau and the Solomon Islands.