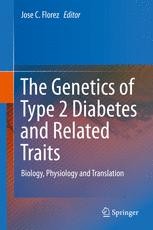 The Genetics of Type 2 Diabetes and Related Traits

This book presents the state of the art of type 2 diabetes genetics, from the process of genetic discovery to its interpretation and clinical application, and illustrates a model for other complex human phenotypes.The first section explores genome-wide association studies, the extension of this method to less accessible phenotypes and the arrival of next-generation sequencing. A further section goes beyond genetics to illustrate how other data sources can help interpret genetic data, such as leveraging population diversity, the correlation of genetic associations with physiological measurements, gene expression modulation, environmental factors and our microbial commensals. The third section describes advances in elucidating the complex path from association to function using in-depth sequencing and functional studies of the cellular and molecular effects of genes in the loci identified by genetics. The final section links our current understanding with clinically relevant questions, such as prediction, interactions with drugs or nutrients, and disease prevention, and paints a realistic but hopeful vision of the future.

Jose C. Florez, M.D., Ph.D. is the Chief of the Diabetes Unit at the Massachusetts General Hospital, an Associate Professor at Harvard Medical School, and an Institute Member at the Broad Institute, where he leads the Diabetes Research Group, co-leads the Program in Metabolism, and is active in the Program in Medical and Population Genetics.

He and his group have contributed to the performance and analysis of high-throughput genome-wide association and sequencing studies in type 2 diabetes and related traits, in the Diabetes Genetics Initiative, the Framingham Heart Study, and other international consortia such as MAGIC, GENIE, DIAGRAM, T2D-GENES and SIGMA, where he plays management roles. He leads the genetic research efforts of the Diabetes Prevention Program, where the effects of genetic variants on the development of diabetes can be examined prospectively, and their impact on specific behavioral and pharmacological preventive interventions can be assessed. He is the Principal Investigator of the Study to Understand the Genetics of the Acute Response to Metformin and Glipizide in Humans (SUGAR-MGH), and also conducts other pharmacogenetic studies at MGH. He is an author on 135+ original publications and 40+ reviews/book chapters.

In addition to his research and teaching duties, he is clinically active in the MGH Diabetes Center, the Endocrine inpatient consult service, and the Down Syndrome Program. He serves on the Editorial Boards for Human Genetics and the Journal of Clinical Endocrinology and Metabolism, and has been on Editorial Boards for Diabetes and Diabetologia; he is also the Editor-in-Chief for Current Diabetes Reports. He is the recipient of the MGH Physician Scientist Development Award, a Doris Duke Charitable Foundation Clinical Scientist Development Award, the MGH Department of Medicine Stephen Krane Award, the MGH Research Scholars Award, and the 2010 Presidential Early Career Award for Scientists and Engineers, the highest honor bestowed by the United States government on science and engineering professionals in the early stages of their independent research careers.