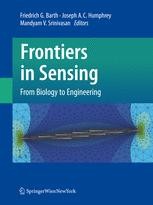 From Biology to Engineering

Biological sensory systems, fine-tuned to their specific tasks with remarkable perfection, have an enormous potential for technical, industrial, and medical applications. This applies to sensors specialized for a wide range of energy forms such as optical, mechanical, electrical, and magnetic, to name just a few.
This book brings together first-hand knowledge from the frontiers of different fields of research in sensing. It aims to promote the interaction between biologists, engineers, physicists, and mathematicians and to pave the way for innovative lines of research and cross-disciplinary approaches. The topics presented cover a broad spectrum ranging from energy transformation and transduction processes in animal sensing systems to the fabrication and application of bio-inspired synthetic sensor arrays. The various contributions are linked by the similarity of what sensing has to accomplish in both biology and engineering.

Friedrich G. Barth, born in Munich, Germany, in 1940, studied biology and human physiology at the University of Munich and at the University of California at Los Angeles. He received his Ph.D. from the University of Munich in 1967. In 1974 he succeeded Martin Lindauer as the Chair of Zoology at the University of Frankfurt am Main. In 1987 he then moved to the University of Vienna, where he established the Department for Neurobiology and founded the Austrian Neuroscience Association, for which he served as the first president. Since 2008 he has held the status of professor emeritus at the University of Vienna. His research interests centre on invertebrate neurobiology. Always considering the entire animal and its natural behaviour in its natural habitat, his approach combines fieldwork with laboratory work and the application of advanced technologies in search of functional principles. The main focus of his work has been on the workings of sensory systems and their neuroethological roles as well as related biomechanical and physical questions. Multidisciplinary collaborations with physical scientists and engineers characterize much of Professor Barth’s research. Together with Pepe Humphrey he organized several international conferences to bring together biology and the physical sciences. The senses of spiders, remarkably sophisticated both in a biological and technical sense, and, more recently, problems of communication in meliponine (“stingless”) bees took most of his attention. His own research and fieldwork, lecturing, and many guest professorships took him to numerous countries all around the world. He is a member of the Academia Europaea, the German National Academy of Sciences/Leopoldina, the Bavarian Academy of Sciences, and the Austrian Academy of Sciences. In 2001 he received the prestigious Karl Ritter von Frisch Medal of the German Zoological Society. Apart from having published some 170 full-length research papers he has served as the editor-in-chief of the Journal of Comparative Physiology A since 1996 and is the author and editor of several books.  Among them are “Insects and Flowers: The Biology of a Partnership” (1991), “A Spider’s World: Senses and Behavior” (2002) and “Sensors and Sensing in Biology and Engineering” (FG Barth, JAC Humphrey, T Secomb eds.)  (2003).

Joseph A.C. Humphrey† was born in La Habana, Cuba, in 1948, and earned diplomas in Chemical Engineering both from the University of Barcelona, Spain in 1970 and from the University of Toronto, Canada (M.A. Sc.) in 1973. In 1977 he received a Ph.D. in Mechanical Engineering from the University of London, and in 1997 a D.Sc. in Engineering, again from the University of London. Having started out at Princeton University in 1977, Pepe (as everyone called him) joined the faculty of the Department of Mechanical Engineering at the University of California in Berkeley in 1978 and stayed there until 1994 as an Assistant Professor, Associate and ultimately Full Professor. After two years at the University of Arizona in Tucson and three years at Bucknell University, he settled at the University of Virginia in Charlottesville in 2000 as Wade Professor of Engineering and Applied Science and Head of the Department of Mechanical and Aerospace Engineering, with an unusual joint appointment in the Department of Biology. In March 2010 his sudden death abruptly ended Joseph Humphrey’s remarkable career. His main research interests were transport phenomena, laminar and turbulent flows, flow - structure interactions, and biological flows as well as bio-inspired sensors and sensing. Joseph Humphrey was a true lover of nature and enthusiastically collaborated with biologists aiming to uncover and understand flows at various interfaces and length scales and their relation to the natural environment. Among the animal sensors he mainly worked on were the medium flow sensors of spiders and fish and insect chemoreceptors. His experimental and computational research was enormously productive with some 150 archived publications. Together with Friedrich Barth, his friend of many years, he organized several international conferences bringing together engineers and biologists. Joseph Humphrey was a fellow of the American Society of Mechanical Engineers, held honorary and visiting professorships at the universities of Kyoto, Liverpool and Vienna, and served as an active member in numerous professional societies.

Mandyam V. Srinivasan has been a Professor of Visual Neuroscience at the Queensland Brain Institute and Professor of Electrical Engineering at the School of Information Technology and Electrical Engineering at the University of Queensland, Australia, since 2007. His main research interests are the principles of visual processing in simple neural systems, and the application of these principles to machine vision as used in robotics and unmanned aircraft. He has spent more than 20 years studying principles of visual flight control and navigation and the most remarkable cognitive capacities of honeybees. He has been asking questions such as “How do bees control their flight speed?  How do they avoid collisions with obstacles? How do they determine how far they have flown? and “How do they orchestrate smooth landings?” Born in 1948 and raised in India, Mandyam Srinivasan received a Master’s degree in Applied Electronics and Servomechanisms from the prestigious Indian Institute of Science in Bangalore in 1970. He then moved to the United States and received his Ph.D. in Engineering and Applied Science from Yale University in 1977. Only one year later he went to Australia, where he was a research fellow of the Departments of Neurobiology and Applied Mathematics at the Australian National University in Canberra from 1978 to 1982. After a break of three years at the University of Zurich, Switzerland, he returned to Australia to work again at the Australian National University in Canberra from 1982 to 2006, since 2000 as the Director of the Center for Visual Science and since 2002 as Distinguished Professor of Visual Science. Professor Srinivasan is a Fellow of the Australian Academy of Science, the Royal Society of London, and the Academy of Sciences for the Developing World. Among his many awards are an honorary doctor’s degree from the University of Zurich, the Rank Prize in Optoelectronics, UK (2008) and the Prime Minister’s Science Prize, Australia (2006). Although formally trained as an engineer, Professor Srinivasan has always been interested in the interface between engineering and biology. He has published over 180 full-length research papers and edited two books to date, one of them together with S. Venkatesh entitled “From Living Eyes to Seeing Machines” (1997), and another with D. Floreano, J.-C. Zufferey and C. Ellington entitled “Flying Insects and Robots” (2009).