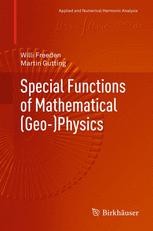 Special functions enable us to formulate a scientific problem by reduction such that a new, more concrete problem can be attacked within a well-structured framework, usually in the context of differential equations. A good understanding of special functions provides the capacity to recognize the causality between the abstractness of the mathematical concept and both the impact on and cross-sectional importance to the scientific reality. The special functions to be discussed in this monograph vary greatly, depending on the measurement parameters examined (gravitation, electric and magnetic fields, deformation, climate observables, fluid flow, etc.) and on the respective field characteristic (potential field, diffusion field, wave field). The differential equation under consideration determines the type of special functions that are needed in the desired reduction process. Each chapter closes with exercises that reflect significant topics, mostly in computational applications. As a result, readers are not only directly confronted with the specific contents of each chapter, but also with additional knowledge on mathematical fields of research, where special functions are essential to application. All in all, the book is an equally valuable resource for education in geomathematics and the study of applied and harmonic analysis. Students who wish to continue with further studies should consult the literature given as supplements for each topic covered in the exercises.

“This is an erudite and competent book of great value, not only to specialists in the field. It should be very useful for both advanced students and active researchers in the field of geomathematics, geophysics, and geoengineering, and also for geooriented applied mathematicians. The style is superb and clear, and the organization is very well planned. I believe this excellent book should be required reading for all earth-oriented scientists.” (Andrzej Icha, Pure and Applied Geophysics, Vol. 172, 2015)

“This book provides an accessible and modern approach to special functions and applications to geomathematics, applied mathematics, environmental and engineering sciences. … this will create new interest and useful leads for those engaged in the advanced study and research in special functions and their applications. … book will continue to be very useful as a graduate level text and an interdisciplinary research reference for professionals in applied mathematics, geomathematics and harmonic analysis. … this book is a new and excellent addition to the mathematics literature.” (L. Debnath, Mathematical Reviews, October, 2013)