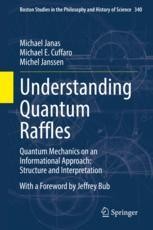 Quantum Mechanics on an Informational Approach: Structure and Interpretation

This book offers a thorough technical elaboration and philosophical defense of an objectivist informational interpretation of quantum mechanics according to which its novel content is located in its kinematical framework, that is, in how the theory describes systems independently of the specifics of their dynamics.

With a Foreword by Jeffrey Bub.

“Understanding Quantum Raffles is a wonderful book for both the specialists and those with curious minds. The elegance and the simplicity with which the 'three Mikes' explain some of the deepest aspects of quantum mechanics on the basis of probabilities and correlations are dazzling and delightful. The same elegance and simplicity also make the book ideal for any engaged reader who ever wondered what is so special about quantum mechanics. In our age of new quantum technologies, this is something anyone should read.” (Guido Bacciagaluppi, author of Quantum Theory at the Crossroads)

“This book makes a sustained argument for an informational interpretation of quantum theory, blending an elegant mathematical characterisation of quantum correlations with incisive historical and philosophical analysis. A must-read for those interested in quantum foundations, and also a fertile source of teaching inspiration for quantum theory.” (Leah Henderson, Department of Theoretical Philosophy, University of Groningen)

“This is one of the most fascinating and accessible presentations of the informational approach to quantum mechanics. What has so far been mostly restricted to the theoretical physics community is here masterfully explained for a broader audience even without a physics background. Scholars, students, and laypeople alike will appreciate the clear, vivid, and yet deep discussion of what raffle tickets and correlation elliptopes can tell us about the physics and philosophy of the quantum world.” (Markus Müller, Institute for Quantum Optics and Quantum Information, Vienna)

Michael Janas is a theoretical physicist and a Teaching Specialist in the School of Physics and Astronomy at the University of Minnesota. His research interests include semi-classical methods in condensed matter physics and the foundations of quantum mechanics.

Michael E. Cuffaro is an Alexander von Humboldt Research Fellow at the Munich Center for Mathematical Philosophy, LMU Munich. His research interests are mainly in the philosophy of science and in the history of philosophy of science, with a particular focus on quantum mechanics, theories of quantum information, and computation.