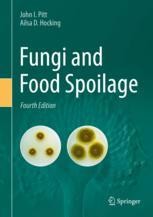 The first three editions of Fungi and Food Spoilage established, then consolidated, a reputation as the leading book on foodborne fungi.  It details media and methods for isolation and identification, descriptions of species, and information on their physiology, ecology and mycotoxin formation.  It is an invaluable reference for food microbiologists investigating fungal food spoilage problems, both in field crops and processed foods, and the likelihood of mycotoxin production in either.
The Fourth Edition incorporates major differences from the Third: multiple changes in nomenclature due to changes in the International Code of Nomenclature for algae, fungi and plants; many taxonomic changes due to improvements in, and more widespread application of, molecular methods in taxonomy; the introduction of colour colony photographs where appropriate; and a new chapter on mycotoxins.

The introductory chapters of the book deal with the ecology of food spoilage, and provide an overview of how food processing, packaging and storage parameters influence fungal growth.  A subsequent chapter overviews the fundamentals of naming and classifying fungi.  Morphological methods and media suitable for low cost and effective isolation, enumeration and identification of foodborne fungi are provided, together with many more specialised media and techniques.
The major part of the book provides keys, descriptions and illustrations of all yeasts and filamentous fungi commonly encountered in foods.  Other known characteristics of the species, including physiology and ecology are included.  Chapters on the types and species of fungi likely to be found in fresh, harvested and variously processed foods are followed by a new chapter on mycotoxins, both major and minor, their sources, both fungal and food, and their implications for human health.
The broad and practical nature of the coverage will appeal to microbiologists, mycologists and biotechnologists in the food industry, as well scientists in academic, research and public health institutions.
Drs Pitt and Hocking worked for CSIRO Food for more than 100 years combined.  Both are now retired from CSIRO: Dr Pitt continues to work part time with Microbial Screening Technologies, a biodiscovery company.
Show all
About the authors

•           Dr John I. Pitt was employed by CSIRO Food (under various names) from 1954 to 2018, commencing as a Technical Assistant, rising to Chief Research Scientist n 1992 and then, after official retirement in 2002, continuing to work as an Honorary Fellow. His prime interest was fungi in foods, where he contributed in three areas: media and methods in food mycology; species of foodborne fungi, their sources, physiological properties and ecology; and their production of mycotoxins. He was elected to Fellowship of the International Mycological Association, and Life Membership the Mycological Society of America, the British Mycological Society and the Australian Society for Microbiology. He is currently employed (part time) by Microbial Screening Technologies, a biodiscovery company.
•           Dr Ailsa D. Hocking joined Dr Pitt at CSIRO Food in 1974: they worked there together for more than 40 years. Dr Hocking rose to Senior Principal Research Scientist before she officially retired in 2015, then continued to work as an Honorary Fellow until she finally retired this year. Her principal research work was in the study of  foodborne fungi, particularly their physiology and ecology, and also media and methods for their isolation.  She also spent many years liaising with the Australian food industry over many and varied food related industrial problems. She served as the mycological Editor of International Journal of Food Microbiology for a number of years.