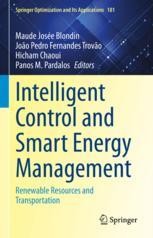 This volume aims to provide a state-of-the-art and the latest advancements in the field of intelligent control and smart energy management.  Techniques, combined with technological advances, have enabled the deployment of new operating systems in many engineering applications, especially in the domain of transport and renewable resources. The control and energy management of transportation and renewable resources are shifting towards autonomous reasoning, learning, planning and operating. As a result, these techniques, also referred to as autonomous control and energy management, will become practically ubiquitous soon. The discussions include methods, based on neural control (and others) as well as distributed and intelligent optimization.  While the theoretical concepts are detailed and explained, the techniques presented are tailored to transport and renewable resources applications, such as smart grids and automated vehicles. The reader will grasp the most important theoretical concepts as well as to fathom the challenges and needs related to timely practical applications. Additional content includes research perspectives and future direction as well as insight into the devising of techniques that will meet tomorrow’s scientific needs. This contributed volume is for researchers, graduate students, engineers and practitioners in the domains of control, energy, and transportation.

Maude Blondin is an assistant professor at the Université de Sherbrooke in Canada. She graduated with a Ph.D. in Electrical Engineering from the Université du Québec à Trois-Rivières,  where she obtained the prestigious Vanier Canada Graduate Scholarship. Her doctoral research was on computational intelligence methods and soft computing techniques applied to control engineering. After her Ph.D., Dr. Blondin did postdoctoral research in the mechanical and aerospace engineering department at the University of Florida. She expanded her research interests to multiobjective optimization applied to multiagent control strategies. Her current research is driven by developing distributed multiobjective optimization algorithms based on exploring the Pareto Front, soft computing methods, and swarm intelligence for multiagent systems. These algorithms apply to many applications ranging from energy management to military uses. Dr. Blondin is a Associate Editor of SN Operations Research Forum, has co-edited two contributed books, and served as a reviewers for many recognized journals. She has published over 20 journal and conference articles on control and optimization for engineering applications and is the author of the Springer monograph, Controller tuning Optimization Methods for multi-constraints and non-linear systems.
João Pedro F. Trovão (SM’17) received the M.Sc. degree and the Ph.D. degree in Electrical Engineering from the University of Coimbra, Coimbra, Portugal, in 2004 and 2013, respectively. From 2000 to 2014, he was a Teaching Assistant and an Assistant Professor with the Polytechnic Institute of Coimbra – Coimbra Institute of Engineering (IPC–ISEC), Portugal. Since 2014, he has been a Professor with the Department of Electrical Engineering and Computer Engineering, University of Sherbrooke, Sherbrooke, QC, Canada, where he holds the Canadian Research Chair position in Efficient Electric Vehicles with Hybridized Energy Storage Systems. He is an author/coauthor of over 150 journal and conference papers. His research interests cover the areas of electric vehicles, hybridized energy storage systems, energy management and rotating electrical machines.  Dr. Trovão was the General Chair of the 2018 IEEE Vehicle Power and Propulsion Conference, Chicago, US. He was a Guest Editor for the Special Issue of IET ELECTRICAL SYSTEMS IN TRANSPORTATION ON ENERGY STORAGE AND ELECTRIC POWER SUB-SYSTEMS FOR ADVANCED VEHICLES. He was a Guest Editor for the Special Issues of IEEE TRANSACTIONS ON VEHICULAR TECHNOLOGY ON ELECTRIC POWERTRAINS FOR FUTURE VEHICLES AND ON ADVANCED VEHICLE POWER PROPULSION SYSTEMS. He is a Senior Editor for the Automotive Electronics topic of the IEEE VEHICULAR TECHNOLOGY MAGAZINE.
Hicham Chaoui (S’01-M’12-SM’13) received the Ph.D. degree in electrical engineering (with honors) from the University of Quebec, Trois-Rivières, QC, Canada, in 2011. His career has spanned both academia and industry in the field of control and energy systems. From 2007 to 2014, he held various engineering and management positions in the Canadian industry. He is currently an Associate Professor at Carleton University, Ottawa, ON, Canada and an Affiliate Professor at the University of Quebec, Trois-Rivières, QC, Canada. Prior to that, he was an Assistant Professor at Tennessee Technological University, TN, USA. His research interests include adaptive and nonlinear control theory, intelligent control, robotics, electric motor drives, and energy conversion and storage systems. His scholarly work has resulted in over 150 journal and conference publications. Dr. Chaoui is a senior member of IEEE and a registered professional engineer in the province of Ontario. He is also an Associate Editor of IEEE Transactions on Vehicular Technology, IEEE Transactions on Automation Science and Engineering, and several other journals. Dr. Chaoui is a recipient of the Best Thesis Award and the Governor General of Canada Gold Medal Award. He is also a recipient of the FED Research Excellence Award and the Top Editor Recognition from IEEE Vehicular Technology Society.
Panos Pardalos is a Distinguished Professor  in the Department of Industrial and Systems Engineering at the University of Florida, and an affiliated faculty of Biomedical Engineering and Computer Science & Information & Engineering departments. Dr. Pardalos is a world renowned leader in Global Optimization, Mathematical Modeling, Energy Systems, and Data Sciences. He is a Fellow of AAAS, AIMBE, and INFORMS and was awarded the 2013 Constantin Caratheodory Prize of the International Society of Global Optimization. In addition, Dr. Pardalos has been awarded the 2013 EURO Gold Medal prize bestowed by the Association for European Operational Research Societies. Dr. Pardalos has been awarded a prestigious Humboldt Research Award (2018-2019). The Humboldt Research Award is granted in recognition of a researcher’s entire achievements to date – fundamental discoveries, new theories, insights that have had significant impact on their discipline. Dr. Pardalos is also a Member of several  Academies of Sciences, and he holds several honorary PhD degrees and affiliations. He is the Founding Editor of Optimization Letters, Energy Systems, and Co-Founder of the International Journal of Global Optimization, Computational Management Science, and Springer Nature Operations Research Forum. He has published over 500 journal papers, and edited/authored over 200 books. He is one of the most cited authors (google h-index 104) and has graduated 70 PhD students so far.