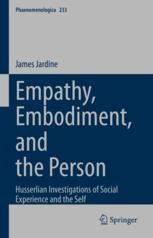 Empathy, Embodiment, and the Person

Husserlian Investigations of Social Experience and the Self

This text explores how self-consciousness and self-understanding differ phenomenologically from the experience and comprehension of others, and the extent to which such relations are constitutively interdependent.

Jardine argues that Husserl’s analyses of selfhood and intersubjectivity are animated by the question of what's at stake in recognising an agent’s engagement as the situated response of a person, rather than simply as the comportment of an animal or living body. Drawing centrally from the freshly excavated Ideas II drafts and manuscripts, the author develops Husserl’s often fragmentary investigations of attention, habit, emotion, freedom, the common world, and action, and considers their implications for subjectivity and the experience of others. Empathy, Embodiment, and the Person also brings Husserlian phenomenology into dialogue with twenty-first century philosophical concerns, from discussions of self-consciousness and agency within the analytic tradition to the treatment of social experience in critical theory.

The book shows the reader that transcendental phenomenology can be rejuvenated by engaging with a broader philosophical landscape and will appeal to researchers, students, and instructors in the field.