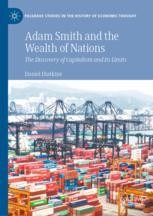 Adam Smith and the Wealth of Nations

The Discovery of Capitalism and Its Limits

This book examines the work of Adam Smith and his interest in the science of the legislator. Smith’s criticism of the mercantile system and the political dimension of capitalism is discussed, alongside insight into what institutions he saw as necessary to transform the mercantile system into a system of natural freedom. Through insights into Smith’s analysis of the political threats of capital accumulation and the growth of inequality, the point at which he discovered capitalism is highlighted.

This book aims to explore Smith’s belief set out in The Wealth of Nations that the mercantile system was a viable, if dangerous, economic model. It is relevant to students and researchers interested in the history of economic thought.

"With an unsurpassed mastery of Adam Smith’s work Daniel Diatkine has written an important revisionist interpretation. By a determined concentration on the problems Smith himself saw and tried to solve, rather than the problems we may have wanted him to see and solve, Diatkine is able to set aside a good deal of the anachronism that still distorts our understanding of the Scottish thinker. In particular, Diatkine re-balances the dangers and opportunities that Smith saw in the economic situation of “natural liberty” that became possible after the Revolution of 1688, stressing the force of Smith’s criticism of the “mercantile system”. Here a striking contribution is Diatkine’s focus on class as an important factor in Smith’s analysis of the detrimental role of the people who wielded capital. The book offers a well-rounded presentation of the philosophical foundations of Smith’s economic ideas." (--Prof. Knud Haakonssen, University of Saint Andrews, U.K.)

Book Title
Adam Smith and the Wealth of Nations
Book Subtitle
The Discovery of Capitalism and Its Limits
Authors
Series Title
Palgrave Studies in the History of Economic Thought
Copyright
2021
Publisher
Palgrave Macmillan
Copyright Holder
The Editor(s) (if applicable) and The Author(s), under exclusive license to Springer Nature Switzerland AG