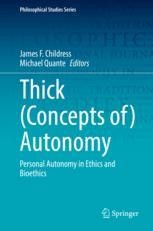 Personal Autonomy in Ethics and Bioethics

This book explores, in rich and rigorous ways, the possibilities and limitations of “thick” (concepts of) autonomy in light of contemporary debates in philosophy, ethics, and bioethics.

Many standard ethical theories and practices, particularly in domains such as biomedical ethics, incorporate minimal, formal, procedural concepts of personal autonomy and autonomous decisions and actions. Over the last three decades, concerns about the problems and limitations of these “thin” concepts have led to the formulation of “thick” concepts that highlight the mental, corporeal, biographical and social conditions of what it means to be a human person and that enrich concepts of autonomy, with direct implications for the ethical requirement to respect autonomy. The chapters in this book offer a wide range of perspectives on both the elements of and the relations (both positive and negative) between “thin” and “thick” concepts of autonomy as well as their relative roles and importance in ethics and bioethics.

This book offers valuable and illuminating examinations of autonomy and respect for autonomy, relevant for audiences in philosophy, ethics, and bioethics.

James F. Childress is Professor Emeritus at the University of Virginia in Charlottesville, VA, USA. Prior to his retirement in 2016, among his various titles, he was University Professor, the John Allen Hollingsworth Professor of Ethics, Professor of Religious Studies, and founding Director of the Institute for Practical Ethics and Public Life at the University of Virginia. His academic interests focus on bioethics, public health ethics, ethics and public policy, and method and theory in ethics and bioethics.

Childress is the author of numerous articles and book chapters—well over 150—as well as several books in biomedical ethics and in other areas of ethics. His books in biomedical ethics include Principles of Biomedical Ethics (with Tom L. Beauchamp) (Oxford University Press, 1979-2019), now in its 8th edition and translated into several languages; Priorities in Biomedical Ethics (The Westminster Press, 1981); Who Should Decide? Paternalism in Health Care (Oxford University Press, 1982); Practical Reasoning in Bioethics (Indiana University Press, 1997); and Public Bioethics: Principles and Problems (Oxford University Press, 2020). He is the co-author with three others of Essentials of Public Health Ethics (Jones and Bartlett, 2014). His other books in ethics include Moral Responsibility in Conflicts (Louisiana State University Press, 1982) and Civil Disobedience and Political Obligation (Yale University Press, 1971). He is also co-editor of seven books, including Belmont Revisited: Ethical Principles for Biomedical Research (with Eric Meslin and Harold Shapiro) (Georgetown University Press, 2005); Organ Donation: Opportunities for Action(with Catharyn Liverman) (National Academies Press, 2006); Opportunities for Organ Donor Intervention Research: Saving Lives by Improving the Quality and Quantity of Organs for Transplantation (with Sarah Domnitz and Catharyn T. Liverman) (National Academies Press, 2017); and Methods in Bioethics: The Way We Reason Now (by the late John Arras) (co-edited with Matthew Adams) (Oxford University Press, 2017).Childress was a member of the presidentially-appointed National Bioethics Advisory Commission 1996-2001. He is an elected member of the National Academy of Medicine (formerly the Institute of Medicine), an elected fellow of the American Academy of Arts and Sciences, and an elected fellow of the Hastings Center. In 2004 he received the Life-time Achievement Award from the American Society of Bioethics and Humanities; in 2010 he received the Henry Knowles Beecher Award from the Hastings Center; in 2017 he received the Praxis Award for contributions to professional ethics from Villanova University.Michael Quante (1962) is full professor of practical philosophy in the department of philosophy at the Westfälische Wilhelms-University and Vice-Rector for Internationalization and Knowledge Transfer. He is Speaker of the Centrum für Bioethik and Co-Editor of the Hegel Studien. His areas of specialization include German idealism, theory of action, personal identity, ethics and biomedical ethics. He is author and co-author of 15 monographs, editor and co-editor of more than 30 volumes and has published more than 200 papers. His research has been translated into more than ten languages. He is principle investigator of the Exzellenzcluster Religion und Politik and Chair of the Steering Committee of the Internationale Marx-Engels-Stiftung (IMES). He has been president of the German Philosophical Association (2012-2014) and associated editor of Ethical Theory and Moral Practice (2004-2011).