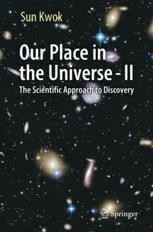 Our Place in the Universe - II

The Scientific Approach to Discovery

Starting from Newton’s times this follow-up to the author’s Springer book “Our Place in the Universe - Understanding Fundamental Astronomy from Ancient Discoveries” addresses the question of “our place in the Universe” from astronomical, physical, chemical, biological, philosophical and social perspectives.

Using the history of astronomy to illustrate the process of discovery, the emphasis is on the description of the process of how we learned and on the exploration of the impacts of discoveries rather than on the presentation of facts. Thus readers are informed of the influence of science on a broad scale.

Unlike the traditional way of teaching science, in this book, the author begins by describing the observations and then discusses various attempts to find answers (including unsuccessful ones). The goal is to help students develop a better appreciation of the scientific process and learn from this process to tackle real-life problems.

Prof. Kwok was the founding director of the Laboratory for Space Research and has served as Chair Professor of Space Science and Dean of Science at The University of Hong Kong.  Previously, Prof. Kwok served as Faculty Professor of the University of Calgary in Calgary, Canada, Killiam Fellow of the Canada Council for the Arts, and Director and Distinguished Research Fellow of the Institute of Astronomy and Astrophysics of Academia Sinica of Taiwan.

Professor Kwok is widely acknowledged as the world-leading expert in the study of planetary nebulae, a class of spectacular-looking objects formed near the end of a star's life. His theory on the origin of planetary nebulae has revolutionized our understanding of the death of Sun-like stars. More recently, he has found that planetary nebulae can rapidly synthesize large amount of complex organic compounds, as well as widely spreading them throughout the Milky Way Galaxy; a finding that has significant implications on the origin of life on Earth.

Prof. Kwok is the author of a number of books, including the best-selling Cosmic Butterflies published by Cambridge University Press in 2001, and Physics and Chemistry of the Interstellar Medium, a standard textbook used in many leading universities in the world.  His book Origin and Evolution of Planetary Nebulae (Cambridge, 2000) is regarded as the most authorative treatise of this subject.  His book Organic Matter in the Universe published by Wiley in 2011 was the first book on this new frontier of astrochemistry.  He has two recent books published by Springer: Stardust: the cosmic seeds of life (2013) and Our Place in the Universe: Understanding Fundamental Astronomy from Ancient Discoveries (2017).