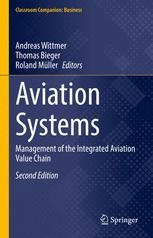 This book provides an overview of the aviation sector by focusing on all major aspects embedded in the environment (subsystems) and the market of aviation. The book explains the linkages between subsystems politics, society, technology, economy, environment, and regulation, and how these subsystems influence each other and the market. The book starts by describing the aviation system, then focuses on the supply side and the demand side of the system and in a final part focuses on steering and controlling the system of aviation from a managerial, economic, and regulatory perspective.

Examples and case studies of airports, airlines, and the production industry in each chapter support the application-oriented approach. The summary and review questions help the reader to understand the focus and main messages of each chapter. Students and researchers in business administration with a focus on aviation, as well as professionals in the industry looking to refresh or broaden their knowledge in the field will benefit from this book.

Andreas Wittmer is Head of International Networks, Senior Lecturer in Management with a special focus on Aviation, and Head of the Center for Aviation Competence at the University of St. Gallen (Switzerland). Next to his focus on teaching on Bachelor, Master, and Executive Education Level, his research focuses on network industries, such as Aviation. He has received several teaching and best paper awards and serves on the boards of regional airport and aviation networks (Industry Cluster and Academic Networks) and as a freelance Aircraft Accident Investigator.

Roland Müller is a lawyer and a public notary, Professor for Private Law, Commercial Law and Aviation Law at the University of St.Gallen (Switzerland), and Professor for Labour and Industrial Law at the University of Bern (Switzerland). Prof. Müller studied law at the universities of Geneva and Zürich. Parallel he completed his flight education with a Commercial Pilot and a Flight Instructor Licence. He co-founded the Center for Aviation Competence (CFAC) together with Prof. Andreas Wittmer. For 6 years, he was the central president of the Aero Club of Switzerland and for 9 years a member of the Swiss Federal Aviation Commission. He performs the function as a Chairman or as a Member of the Board of Directors of several Swiss companies and as Chairman of the Foundation for Aviation Competence (FFAC).