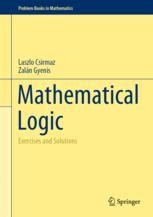 Instructors teaching Mathematical Logic, as well as students who want to understand its concepts and methods, can greatly benefit from this work. The style and topics have been specially chosen so that readers interested in the mathematical content and methodology could follow the problems and prove the main theorems themselves, including Gödel’s famous completeness and incompleteness theorems. Examples of applications on axiomatizability and decidability of numerous mathematical theories enrich this volume.

Laszlo Csirmaz is Senior Researcher at the Institute of Information Theory and Automation (UTIA), Czech Republic and Rényi Alfréd Institute of Mathematics. He started his career in 1975 at the Rényi Institute, where he co-founded the Cryptography Group. From 1996 to 2020, he was Chair of the Computer and Statistics Center at the Central European University, Hungary. Since 1990, he has been delivering lectures at the Eötvös Loránd University, Hungary, mainly on Set Theory and Mathematical Logic, and has held a part-time position at the University of Debrecen, Hungary, from 2001 to 2018.

Zalán Gyenis got his Ph.D. in Mathematics in 2013 from the Central European University, Hungary, and has been Premium Postdoctoral Research Fellow at the Hungarian Academy of Sciences. Since 2017, he has been working as Assistant Professor at the Logic Department of the Jagiellonian University, Poland. In 2018, he was awarded the Alfred Tarski Logic Prize.