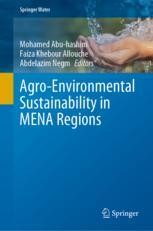 This book focuses on the status quo and the latest information on the water-soil-agriculture nexus in the MENA countries. It presents several case studies and applications from e.g. Morocco, Algeria, Tunisia, Egypt and Jordan, while also sharing and discussing the latest findings. The content includes a range of agriculture-related topics that focus on: water resources management, impacts of climate change, and wastewater treatment for reuse in agriculture sectors; in addition, sustainable approaches to agricultural-based industry, organic crop production, crop water requirements, and soil environment are discussed in an updated and comprehensive review.

In turn, the book discusses the applications of GIS and remote sensing as a new technology for better agriculture management, as well as its use in Egypt as a representative country. In closing, it considers the implementation of an environmental information system in data-scarce MENA countries from the standpoint of the water-food nexus, and addresses the question of climate justice in the MENA region.

Dr. Faiza Khebour Allouche is an associate professor at the High Institute of Agronomic Sciences (ISA-CM), Sousse university, since December 2009. She got PhD degree in 2007,  from the Mirail Toulouse2 University, Toulouse, France.  In the field of  Geography and management-Landscape and Environment.  Her principle background is related to engineering sciences and integrated remote sensing - GIS applications in the field of environment. The practical experience focus in land degradation, land use, soil mapping and environmental studies. She elaborated different research work following the integrated GIS and multiconcept of remote sensing. Dr. Khebour Allouche  current research activities focuses on the application of geomatics to assess and monitor landscape and environment based on integrated GIS-remote sensing. She has different publications, in national and international scientific journals, dealing with the topic of landscape analysis, pointing out indicators of multitemporal land used dynamic and development of integrated management.

Prof. Abdelazim Negm is a professor of Hydraulics (and Water Resources) in the Water and Water Structures Engineering Department at the Faculty of Engineering at Zagazig University (ZU). He worked as a demonstrator in the Faculty of Engineering, ZU in 1986 and continued there until he occupied the position of Vice Dean for Academic and Student Affairs. He worked for the Egypt–Japan University of Science and Technology (E-JUST) as a professor of Water Resources from  December 2012 until September 2016, and was chairperson of the Environmental Engineering Department at E-JUST from March 2013 until March 2016.

Professor Negm has published more than 350 scientific papers in national and international journals and conferences and about fifty book chapters. He has participated in more than eighty-five conferences and was a keynote speaker at several national and international conferences. He has been awarded prizes for best papers three times. His research areas include hydraulics, hydrology, and water resources. Currently, he is very interested in sustainability studies, sustainable development, and the green environment in addition to water resources management. Professor Negm is a member of IAHR and is the head of the Egyptian permanent scientific committee for Water Resources for the promotion of associate and professorship positions for the cycle 2019–2022, and was the Vice Head for the cycle 2016–2019. He is a member of the editorial board of several scientific journals and international conferences and was a member of the organizing committee of Oceanography 2015, and IWTC2013-IWTC2017, and others. Additionally, he was Secretary-General of the IWTC from 2013 until 2017, then a member of the scientific committee. He was the head of the ZU committee for assessment of the scientific publications of ZU faculties until December 2018. Twelve contributed volumes by Springer Nature during the years 2016–2019, under the Handbook of Environmental Chemistry (HEC). Recently, more than ten contributed volumes were published under Springer Water series in the year 2020. Also, he published some books in other series. Currently, he is organizing several contributed volumes to be published by Springer International Publishing during 2021/2022. He was the editor-in-chief of EIJEST (Faculty of Engineering, Zagazig University from 2016 to 2020), associate editor of IWTJ (IWTA) and EMJEI (Springer) and guest lead editor of AJGS–Springer and Scientific African Journal, Elsevier and a member of the editorial board in others. He is the principal investigator of several international projects. Currently, he is a member of the editorial board of the HEC series. Professor Negm is listed in: Marquis’ Who’s Who? for more than ten years until now; IBC’s 2000 Outstanding Intellectuals of the 21st Century; and the ABI  directory for his achievement in the fields of hydraulics and water resources. He has been nominated for many other awards from both IBC and ABI.