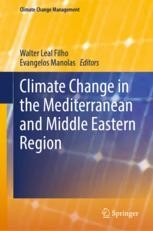 Climate Change in the Mediterranean and Middle Eastern Region

This book serves the purpose of showcasing some of the works in respect of applied research, field projects, and best practice to foster climate change adaptation across the region.

Climate change is having a much greater impact in the Mediterranean than the global average. In the Paris Climate Agreement, the UN member states pledged to stop global warming at well below two degrees, if possible at 1.5 degrees. This mark, which is expected elsewhere only for 2030 to 2050, has already been reached in the region. The situation could worsen in the coming years if the global community does not limit its emissions.

The above state of affairs illustrates the need for a better and more holistic understanding of how climate change affects countries in the Mediterranean region on the one hand, but also on the many problems it faces on the other, which prevent adaptation efforts. There is also a perceived need to showcase successful examples of how to duly address and manage the many social, economic, and political problems posed by climate change in the region, in order to replicate and even upscale the successful approaches used.

It is against this background that the book "Climate Change in the Mediterranean and Middle Eastern Region" has been produced. It contains papers prepared by scholars, practitioners, and members of governmental agencies, undertaking research and/or executing climate change projects, and working across the region.