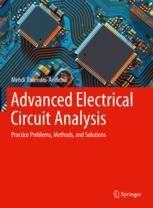 This study guide is designed for students taking advanced courses in electrical circuit analysis. The book includes examples, questions, and exercises that will help electrical engineering students to review and sharpen their knowledge of the subject and enhance their performance in the classroom. Offering detailed solutions, multiple methods for solving problems, and clear explanations of concepts, this hands-on guide will improve student’s problem-solving skills and basic understanding of the topics covered in electric circuit analysis courses.

Mehdi Rahmani-Andebili is an Assistant Professor in the Electrical Engineering Department at Montana Technological University. Before that, he was also an Assistant Professor in the Engineering Technology Department at State University of New York, Buffalo State, during 2019-2021. He received his first M.Sc. and Ph.D. degrees in Electrical Engineering (Power System) from Tarbiat Modares University and Clemson University in 2011 and 2016, respectively, and his second M.Sc. degree in Physics and Astronomy from the University of Alabama in Huntsville in 2019. Moreover, he was a Postdoctoral Fellow at Sharif University of Technology during 2016-2017. As a professor, he has taught many courses such as Essentials of Electrical Engineering Technology, Electrical Circuits Analysis I, Electrical Circuits Analysis II, Electrical Circuits and Devices, Industrial Electronics, Renewable Distributed Generation and Storage, and Control and Feedbacks. Dr. Rahmani-Andebili has more than 100 single-author publications including textbooks, books, book chapters, journal papers, and conference papers. His research areas include Smart Grid, Power System Operation and Planning, Integration of Renewables and Energy Storage into Power Systems, Energy Scheduling and Demand-Side Management, Plug-in Electric Vehicles, Distributed Generation, and Advanced Optimization Techniques in Power System Studies.