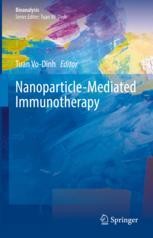 This book is intended to serve as an authoritative reference source for a broad audience involved in the research, teaching, learning, and practice of nanotechnology in immunotherapy. The combination of nanotechnology and immunotherapy is recognized as a promising treatment modality. In particular, the use of nanoparticles in immunotherapy has attracted increased attention for their unique efficacy and specificity in cancer treatment. A wide variety of nanoparticles, such as polymeric and liposomal nanosystems, carbon nanotubes, and gold nanoparticles have provided important nanoplatforms for immunotherapeutic approaches. They have been shown to improve delivery and efficacy of immunotherapeutic agents such as vaccines or adjuvants.

Nanoparticle-mediated thermal therapy has demonstrated the effectiveness for precise tumor cell ablation, radio-sensitization of hypoxic regions, enhancement of drug delivery, activation of thermosensitive agents, and enhancement of the immune system. Plasmonic nanoparticles are a special type of metallic nanoparticles that has received great interest due to their enhanced optical and electromagnetic properties and their superior capacity to convert photon energy into heat for selective photothermal therapy at the nanoscale level. Nanoparticle sizes can also be controlled such that they accumulate preferentially in tumors due to the enhanced permeability and retention effect of tumor vasculature. Various nanosystems such as gold nanoparticles have also been shown to stimulate the immune system.

Immunotherapies could thus synergistically benefit from the combination with targeted nanoparticle-mediated photothermal therapies, especially when hyperthermia around immune-checkpoint inhibitors in the tumor bed is combined with precise thermal ablation of cancer cells. Of great importance is the possibility that such an approach can induce long-term immunological memory that can provide protection against tumor recurrence long after treatment of the initial tumors, like an ‘anticancer vaccine’. Nanoparticle-mediated immunotherapy could lead to an entirely new treatment paradigm that challenges traditional surgical resection approaches for many cancers and metastases.

Tuan Vo-Dinh is R. Eugene and Susie E. Goodson Distinguished Professor of Biomedical Engineering, Professor of Chemistry, and Director of the Fitzpatrick Institute for Photonics at Duke University. Dr. Vo-Dinh completed high school education in Saigon (now Ho Chi Minh City) and pursued  studies in Europe where he received a B.S. in physics in 1970 from EPFL (Ecole Polytechnique Federal de Lausanne), Lausanne and a Ph.D. in physical chemistry in 1975 from ETH (Swiss Federal Institute of Technology), Zurich, Switzerland. Before joining Duke University in 2006, Dr. Vo-Dinh was Director of the Center for Advanced Biomedical Photonics, Group Leader of Advanced Biomedical Science and Technology Group, and a Corporate Fellow, one of the highest honors for distinguished scientists at Oak Ridge National Laboratory (ORNL). His research has focused on the development of advanced technologies for the protection of the environment and the improvement of human health. His research activities involve nano-biophotonics, nanosensors, laser spectroscopy, molecular imaging, medical theranostics and photoimmunotherapy.

Dr. Vo-Dinh has authored over 500 publications in peer-reviewed scientific journals.  He is the author of a textbook on spectroscopy and editor of 8 books.  Elected Fellow of the National Academy of Inventors (NAI), he holds over 58 U.S. and international patents. Dr. Vo-Dinh has received seven R&D 100 Awards for Most Technologically Significant Advance in Research and Development for his pioneering research and inventions of innovative technologies.  He has received the Gold Medal Award, Society for Applied Spectroscopy (1988); the Languedoc-Roussillon Award (France) (1989); the Scientist of the Year Award, ORNL (1992); the Thomas Jefferson Award, Martin Marietta Corporation (1992); two Awards for Excellence in Technology Transfer, Federal Laboratory Consortium (1995, 1986); the Inventor of the Year Award, Tennessee Inventors Association (1996); and the Lockheed Martin Technology Commercialization Award (1998), The Distinguished Inventors Award, UT-Battelle (2003), and the Distinguished Scientist of the Year Award, ORNL (2003). In 1997, Dr. Vo-Dinh was presented the Exceptional Services Award for distinguished contribution to a Healthy Citizenry from the U.S. Department of Energy. Dr. Vo-Dinh received the 2017 Award for Spectrochemical Analysis from the American Chemical Society (ACS), and the 2019 Sir George Stokes Award from the Royal Society of Chemistry (United Kingdom).