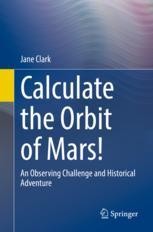 Calculate the Orbit of Mars!

An Observing Challenge and Historical Adventure

Determining the orbit of Mars is particularly important, as originally solving this problem required the founding of modern science. Clark discusses how people came to believe in the Newtonian model of the Solar System, works through the mathematical basis for the theory of gravity, and shows how Newton ruled out the possibility of alternative theories. Readers also learn how it became possible to accurately measure the positions of Mars from a moving, spinning platform—the Earth.

This mid-level observational challenge is well within reach of most serious amateur astronomers. For the observations, only a telescope with auto-guiding capability and the ability to mount a digital single lens reflex (DSLR) camera is required. For the calculations, it is assumed that the reader has a science, engineering, or mathematics background and is familiar with calculus, vectors, and trigonometry.

Previously published books include Measure Solar System Objects and their Movements for Yourself! (Springer 2009) and Viewing and Imaging the Solar System: A Guide for Amateur Astronomers (Springer 2014), both in Springer's Patrick Moore's Practical Astronomy Series. Other works include "An Experience to Remember," a short comedy play about astronomers shown at the Alma Theatre, Bristol in June 2016.