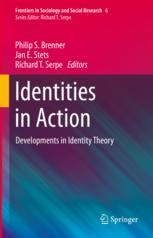 This volume presents recent developments in identity theory and research. Identities are the basic building blocks of society and hold a central place in every social science discipline. Identity theory provides a systematic conceptualization of identities and their relationship to behavior. The research in this volume demonstrates the usefulness of this theory for understanding identities in action in a variety of areas and settings. The volume is organized into three general areas: ethnicity and race; family, religion, and work; and networks, homophily, and the physical environment. This comprehensive and authoritative volume is of interest to a wide readership in the social and behavioral sciences, including students and researchers of sociology, social psychology, psychology, and other social science disciplines.

Philip S. Brenner is Associate Professor and Director of the Graduate Certificate Program in Survey Research in the in the Department of Sociology and Senior Research Fellow in the Center for Survey Research at the University of Massachusetts Boston.  He is a sociological social psychologist and survey methodologist whose work is situated at the intersection of research on self and identity and survey and experimental methodologies. Dr Brenner’s research examines the social sources of measurement and nonresponse errors in surveys, using sociological social psychological theories to understand their contribution to total survey error. He is the author of over 30 peer-reviewed journal articles and book chapters and a recipient of numerous grants from the NSF and other agencies and past-president of the New England Chapter of the American Association for Public Opinion Research.

Richard T. Serpe is Professor Emeritus in the Department of Sociology at Kent State University. He is past Co-Editor of Social Psychology Quarterly and Sociological Perspectives. Professor Serpe is a sociological social psychologist who has been working in identity theory for the past forty years. His recent research is designed to further contextualize identity processes in terms of differential placement within the social structure. This research focuses on specifying proximal social structure, defining counter-normative identities, and exploring the relationships between identity processes and self-relevant outcome, for example, self- esteem, efficacy, anxiety, depression and emotions. He is also an applied survey researcher. He has conducted or directed over 270 research projects funded by several private foundations, public and private organizations, local, state, and federal agencies. His expertise includes both quantitative and qualitative data analysis. His research projects have used several different data collection methods: mailed surveys, face-to-face interviews, telephone interviews, demographic analysis, focus groups, and nominal groups.

Jan E. Stets is Professor in the Department of Sociology and Director of the Social Psychology Research Laboratory at the University of California, Riverside. She is past Director of the Sociology Program at the National Science Foundation, and past Co-Editor of Social Psychology Quarterly. Professor Stets is a sociological social psychologist who works in the areas of self and identity, emotions, morality, and social exchange. She uses identity theory to understand individuals’ self-views, emotions, moral sensibilities, and exchange behaviors within and across situations. Her research primarily employs experimental and survey designs, and her analytic approach is quantitative. She is the author of a dozen books and over 80 papers. Her books have been translated into Japanese, Croatian, Polish, and Chinese. Her Handbook of the Sociology of Emotions received the Outstanding Contribution Award from the ASA Section on Emotions. She is the recipient of NSF grants, a Fellow of the American Association for the Advancement of Science, Fellow of the Society for Experimental Social Psychology, and a member of the Sociological Research Association. She is past chair of the ASA Section on Emotions, the ASA Section on Social Psychology, and the ASA Section on Altruism, Morality, and Social Solidarity. She received the Lifetime Achievement Award from the ASA Emotions Section.