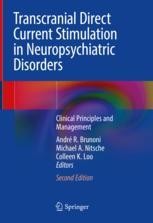 The 2nd edition of this book incorporates the tremendous clinical advances that have occurred in the field of transcranial direct current stimulation (tDCS) over the past 5 years. Since the 1st edition was published, the clinical use of tDCS has moved from its infancy, and is now in a thrilling new phase with numerous possibilities as well as challenges.

tDCS is a technique that excels in terms of safety and tolerability, and within a few years, novel technological developments will allow its use at home. At the same time, large, phase III trials have been exploring the clinical efficacy of tDCS, the results of which have been published in leading journals such as the New England Journal of Medicine and JAMA Psychiatry.

This 2nd edition summarizes the state of the art of the field. Written by leading experts in the field, the book is divided into 5 parts: Introduction and Mechanisms of Action; Research Methods; tDCS in the life cycle; Applications of tDCS in neuropsychiatric disorders (further divided into Psychiatry and Neurology); and The clinical use of tDCS.

It also includes several new chapters, covering topics such as precision stimulation of tDCS; combination of tDCS with different neuroimaging modalities; and use of tDCS in new clinical conditions. Moreover, all chapters have been rewritten and updated.

This book will be of significant interest to psychiatrists, neurologists and neuroscientists new to the field as well as those with a background in tDCS who want to increase their understanding of particular psychiatric conditions.

André R Brunoni is Associate Professor at the Department of Internal Medicine and Psychiatry, University of São Paulo Medical School, he was also a Visiting Professor at the University of Munich (April-2017 / October-2018) with a research fellowship from CAPES / Alexander Von Humboldt Foundation. He holds a PhD in Neuroscience and Behavior from the Institute of Psychology at USP (2010-2012), and received a doctoral fellowship from Harvard Medical School (Boston, USA). He graduated in Medicine (2004) from University of São Paulo Medical School. He is the Director of the Neuromodulation Interdisciplinary Service of the Institute of Psychiatry, Hospital das Clínicas (FMUSP), Senior Researcher of the Longitudinal Study of Adult Health (ELSA-Brazil). His research interests include depression and mood disorders, and noninvasive neuromodulation in the treatment of mental disorders. He has published more than 300 articles in international peer-reviewed journals, and is currently the editor-in-chief of Archives of Clinical Psychiatry.

Colleen Loo is Professor of Psychiatry at the University of New South Wales, NHMRC Leadership Fellow and Professorial Fellow at the Black Dog Institute, Sydney; Australia. She qualified in medicine and psychiatry in Australia (MB BS, FRANZCP) and completed a research doctorate in 2003 (MD). She was chair of psychiatry at St George Hospital (2006-2021), founded the Neurostimulation service at the Black Dog Institute in 2014, and is Regional Medical Director of ECT and Interventional Psychiatry at the Ramsay Northside Group hospitals in Sydney. She was President of the International Society for ECT and Neurostimulation (2018-2020) and is an editorial board member of the journal Brain Stimulation. Her research interests are in developing novel treatments for depression and other psychiatric disorders, focussing on transcranial magnetic stimulation, transcranial direct current stimulation, electroconvulsive therapy and ketamine, and their effects on brain functioning. She has published over 200 peer-reviewed papers and has received grant funding from the Australian NHMRC, US-based NARSAD and Stanley Foundations, UK NHS/MRC and Singapore NMC.

Michael A Nitsche is a Full Professor at the Department of Psychology and Neurosciences at Leibniz Research Centre for Working Environment and Human Factors, Dortmund. He was a Consultant and Head of the Epilepsy Unit of the Department of Clinical Neurophysiology at University Medicine Goettingen (2006-2015) and Registrar at the same department (1999-2005). He graduated in Psychology from Georg August University Goettingen in 1995 and in Medicine in 1998. He received his MD in 2000. His research fields include non-invasive brain stimulation, physiological foundations of cognition and behavior, and neuropsychopharmacology. He has published more than 200 papers in international, peer-reviewed journals, and is currently a member of the editorial boards of Scientific Reports, and Brain Stimulation.