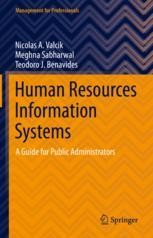 A Guide for Public Administrators

This book provides an introduction to Human Resource Information Systems (HRIS) for those in the public administration field. At the intersection between human resource management and information technology, HRIS is often the key to having and maintaining the personnel data that is essential for hiring and recruitment, strategic planning and analysis, and legal requirements in most public organizations. This book describes what an HRIS system is, what the functionality of such a system should be, and outlines the practical aspects of an HRIS. It also compares the different aspects of human resources in public organizations, non-profit organizations, and private corporations, and how differences across organizations may influence the functionality requirements of the HRIS. Finally, the volume contains both an organizational theory component, which frames how an HRIS interacts with an organization both from a functional standpoint and a reporting standpoint. The book includes a practical component, which includes real-world case studies that illustrate the advantages and pitfalls to implementing an HRIS enterprise system. Providing a thorough introduction to HRIS for both academics and practitioners, this volume is appropriate for researchers, graduate students, and practitioners in the fields of public administration, higher education administration, information systems, computer science, and human resources.

Nicolas A. Valcik currently works as the Managing Director for Institutional Research for Texas Tech University. Previously Nicolas as the Director for Institutional Research and Business Intelligence at the University of Texas of the Permian Basin, the Executive Director for Institutional Effectiveness at Central Washington University, Director for Institutional Research for West Virginia University and as Associate Director of Strategic Planning and Analysis for the University of Texas at Dallas. In addition, Nicolas held an academic appointment as a clinical assistant professor for Public Affairs for the University of Texas at Dallas. Prior to 1997, Nicolas worked for a number of municipalities, across different of departments, as well as for Nortel. Nicolas received a doctorate degree in Public Affairs from the University of Texas at Dallas in 2005, a master’s degree in Public Affairs from the University of Texas at Dallas in 1996, a bachelor’s degree in Interdisciplinary Studies from the University of Texas at Dallas in 1994, and an associate’s degree in political science from Collin County Community College in 1994.
Nicolas has authored the following books for Taylor and Francis; Institutional Research Initiatives in Higher Education  (2018) co-edited with Jeffery Johnson, City Planning for the Public Manager  (2017) co-authored with Ted Benavides, Todd Jordan and Andrea Stigdon, Case Studies in Disaster Response and Emergency Management: Second Edition (2017) co-authored with Paul Tracy,  Strategic Planning, Decision-Making and Practical Aspects for Public Sector and Non-Profit Organizations (2016), co-authored with Ted Benavides and Kim Scruton Non-Profit Organization Case Study Book (2015), Hazardous Materials Compliance for Public Research Organizations: A Case Study (2013), co-authored with Paul E. Tracy Case Studies in Disaster Response and Emergency Management and co-authored with Ted Benavides Practical Human Resources Management for Public Managers: A Case Study Approach (2011). Prior to 2011 Nicolas authored Regulating the Use of Biological Hazardous Materials in Universities: Complying with the New Federal Guidelines, which was published by Mellen Press in 2006. Nicolas has served as editor for three volumes of New Directions for Institutional Research (Volumes 135, 140, 146 and co-edited with Gary Levy 156) in addition to writing numerous articles and book chapters on institutional research topics and homeland security issues. Nicolas specializes in several areas as both a researcher and a practitioner: higher education, information technology, human resources, homeland security, organizational behavior, and emergency management.
Meghna Sabharwal is Professor and Program Director in the Public and Nonprofit Management program at the University of Texas at Dallas. Her research interests are focused on public human resources management, specifically workforce diversity, job performance, job satisfaction, and high-skilled migration. She is widely published in public administration journals, and is the winner of two best paper awards. She also has two book publications: Public Personnel Administration (6th Ed.) and Public Administration in South Asia: India, Bangladesh, and Pakistan. She is the recipient of the 2020 Rita Mae Kelly Distinguished Research Award by the Section for Women in Public Administration (SWPA), American Society for Public Administration and the 2019 Mary Hamilton Award given by the International Chapter, ASPA. She also received the 2015 Julia J. Henderson International Award by the American Society for Public Administration (ASPA) Section on Women in Public Administration. In 2018, she was chosen as one of the top 20 women in the United States in the field of Public Affairs. She has won several graduate and undergraduate teaching awards. She is also the recipient of two National Science Foundation grants. She serves on several editorial boards and is the incoming Associate Editor for the Review of Public Personnel Administration, the leading human resource journal in public administration. She graduated with a PhD in public administration from Arizona State University in 2008.
Teodoro J. Benavides currently serves as a faculty member, Associate Professor of Practice, for the University of Texas at Dallas (UTD) in the School of Economic, Political and Policy Sciences’ Public and Nonprofit Management Program.  In addition, he serves as the Director for the Masters in Public Affairs Program and the Department’s Internship Coordinator.
Teodoro J. Benavides has co-authored a textbook on human resources titled, Practical Human Resources for Public Managers, with Nicolas Valcik, has co-authored a textbook on nonprofits titled, Non-Profit Organizations: Real Issues for Public Administrators, with Nicolas Valcik and Kimberly Scruton and has co-authored a textbook on urban planning titled, City Planning for the Public Manager, with Nicolas Valcik, Todd Jordan and Andrea Stigdon. He also currently contracted to write two additional books on Local Government Management and Human Resource Information Systems.
Teodoro J. Benavides served from 1998 to 2004 as city of manager of Dallas, Texas.  From 1996 to 1998, Mr. Benavides was city manager of the City of Denton, Texas.  Previously, he held several other positions with the City of Dallas, including assistant city manager, director of the budget and research, assistant director of the human services, assistant director of capital budget programs, capital budget administrator and budget analyst.
Benavides earned a bachelor’s degree in education, political science, and history from Texas A&M University-Kingsville and a master’s degree in public administration from Southern Methodist University.  Benavides is a fellow of the National Academy of Public Administration (NAPA).