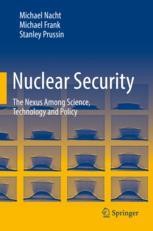 This textbook is the first comprehensive and systematic account of the science, technology and policy issues associated with nuclear energy and nuclear weapons. Throughout their account of the evolution of nuclear policy, from its origin to the early Trump presidency, the authors interweave clear technical expositions of the science and technology that underpin and constrain it. The book begins by tracing the early work in atomic physics, the discovery of fission, and the developments that led to the Manhattan Project and the delivery of atomic bombs against Japan that ended World War II. It follows the initial failed attempts at nuclear disarmament, the onset of the Cold War nuclear arms competition, and the development of light water reactors to harness nuclear energy for electric power generation. The authors thoroughly unpack the problem of nuclear proliferation, examining the strategy and incentives for states that have and have not pursued nuclear weapons, and providing an overview of the nuclear arsenals of the current nuclear weapon states. They trace the technical, political and strategic evolution of deterrence, arms control and disarmament policies from the first attempts for an Outer Space Treaty in 1957 through the new START treaty of 2009. At critical junctures in the narrative, the authors explain the relevant nuclear science and technology including nuclear fission and criticality; nuclear materials and enrichment; nuclear detonation and nuclear weapons effects; nuclear weapons stockpile constraints, stewardship and surveillance; nuclear fusion and thermonuclear weapons; technologies for monitoring, verification and proliferation; and nuclear forensics. They conclude with an assessment of contemporary issues ranging from the Joint Comprehensive Plan of Action reached to halt Iran’s nuclear weapons development program, to the threat of nuclear terrorism, the perceived nuclear weapons policies of Russia and China, and the US’ efforts to provide disincentives for its allies to acquire their own nuclear weapons by maintaining credible security guarantees.

Michael Nacht is the Thomas and Alison Schneider Professor of Public Policy at the University of California, Berkeley. He is co-author and co-editor of Strategic Latency and World Power (Lawrence Livermore National Laboratory, 2014), the author of The Age of Vulnerability:  Threats to the Nuclear Stalemate (Brookings, 1985) and more than eighty journal articles (in Foreign Affairs, Foreign Policy, Survival, Daedalus and others) and book chapters. He has twice served in US Senate-confirmed positions associated with nuclear weapons policy. He was Assistant Secretary of Defense for Global Strategic Affairs (2009-2010) for which he received the Distinguished Public Service Medal, the Department’s highest civilian honor. Previously he was Assistant Director for Strategic and Eurasian Affairs of the US Arms Control and Disarmament Agency (1994-1997) for which he received the Distinguished Honor Award, the Agency’s highest honor. He received a B.S. in Aeronautics and Astronautics and an M.S. in Operations Research from New York University and a Ph.D. in Political Science from Columbia University.

Michael Frank is a design physicist at the Lawrence Livermore National Laboratory who splits his time between work related to the nuclear weapons stockpile and countering nuclear terrorism. He worked previously for a decade on nuclear threat assessment and incident response. Dr. Frank received a B.S.E. in Aerospace Engineering from Princeton University, an M.P.P. from Harvard's Kennedy School of Government, and a Ph.D. in Nuclear Engineering from the University of California, Berkeley. He and Dr. Nacht have taught the course on which the book is based at the University of California, Berkeley.

Professor Stanley Prussin was a faculty member in the University of California, Berkeley Department of Nuclear Engineering from 1966-2015. For many years he taught the Department's courses in nuclear physics for applications and engineering science applications of nuclear medicine, among many others. His research interests were in low-energy nuclear physics and nuclear forensics, for which he was internationally noted. He received the Humboldt Senior Scientist Award, among many others. Professor Prussin received his B.S. degree in Chemistry from the Massachusetts Institute of Technology and his M.S. and Ph.D. in Chemistry from the University of Michigan. Professor Prussin helped conceptualize the proposed volume and drafted initial technical sections. He passed away from cancer in 2015.