Psychology
Studies in History and Philosophy of Science
Free Preview 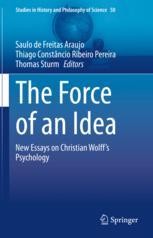 The Force of an Idea

This book presents, for the first time in English, a comprehensive anthology of essays on Christian Wolff's psychology written by leading international scholars. Christian Wolff is one of the towering figures in 18th-century Western thought. In the last decades, the publication of Wolff's Gesammelte Werke by Jean École and collaborators has aroused new interest in his ideas, but the meaning, scope, and impact of his psychological program have remained open to close and comprehensive analysis and discussion. That is what this volume aims to do.

This is the first volume in English completely devoted to Wolff's efforts to systematize empirical and rational psychology, against the background of his understanding of scientific method in metaphysics. Wolff thereby paved the way to the very idea of a scientific psychology. The book is divided into two parts. The first one covers the theoretical and historical meaning and scope of Wolff's psychology, both in its internal structure and in its relation to other parts of his philosophical system, such as logic, cosmology, aesthetics, or practical philosophy. The second part deals with the reception and impact of Wolff's psychology, starting with early reactions from his disciples and opponents, and moving on to Kant, Hegel, and Wundt.

The Force of an Idea: New Essays on Christian Wolff's Psychology shows not only that Wolff's psychological ideas have been misinterpreted, but also that they are historically more significant than traditional wisdom has it. The book, therefore, will be of interest to historians and philosophers of science, historians of philosophy and psychology, as well as to philosophers and psychologists interested in understanding the roots of scientific psychology in 18th and 19th century German philosophy.

Saulo de Freitas Araujo is Professor of History and Philosophy of Psychology at the Federal University of Juiz de Fora in the State of Minas Gerais, Brazil. He is also Director of the Wilhelm Wundt Center for the History and Philosophy of Psychology (NUHFIP) at the same institution. His work focuses on the historical development and philosophical foundations of scientific psychology, especially in the German tradition. Among numerous publications, he is author of Wundt and the Philosophical Foundations of Psychology: A Reappraisal (Springer, 2016).

Thiago Constâncio Ribeiro Pereira is Professor of Psychology at the Fluminense Federal University in Volta Redonda, Rio de Janeiro, Brazil. He is also coordinator of the Philosophy and History of Psychology Research Group (FHIPSI) at the same institution. His current work focuses on Christian Wolff and eighteenth-century psychology, ideas of mind and body in psychological theories, and historiography of psychology.

Thomas Sturm is ICREA research professor at the Autonomous University of Barcelona (Spain). His work centers on three areas: Kant’s philosophy, theories of rationality at the intersection of philosophy and psychology, and the relations between philosophy and history of science. Main publications: Kant und die Wissenschaften vom Menschen (2009); How Reason Almost Lost Its Mind: The Strange Career of Cold War Rationality (co-authored with L. Daston, M. Gordin, P. Erickson, J. Klein and R. Lemov, 2013). Numerous articles in journals such as Erkenntnis, Kant-Studien, Studies in History and Philosophy of Science, or Synthese.