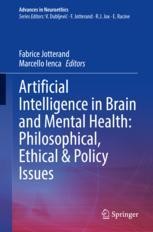 This volume provides an interdisciplinary collection of essays from leaders in various fields addressing the current and future challenges arising from the implementation of AI in brain and mental health. Artificial Intelligence (AI) has the potential to transform health care and improve biomedical research. While the potential of AI in brain and mental health is tremendous, its ethical, regulatory and social impacts have not been assessed in a comprehensive and systemic way.

The volume is structured according to three main sections, each of them focusing on different types of AI technologies. Part 1, Big Data and Automated Learning: Scientific and Ethical Considerations, specifically addresses issues arising from the use of AI software, especially machine learning, in the clinical context or for therapeutic applications. Part 2, AI for Digital Mental Health and Assistive Robotics: Philosophical and Regulatory Challenges, examines philosophical, ethical and regulatory issues arising from the use of an array of technologies beyond the clinical context. In the final section of the volume, Part 3 entitled AI in Neuroscience and Neurotechnology: Ethical, Social and Policy Issues, contributions examine some of the implications of AI in neuroscience and neurotechnology and the regulatory gaps or ambiguities that could potentially hamper the responsible development and implementation of AI solutions in brain and mental health. In light of its comprehensiveness and multi-disciplinary character, this book marks an important milestone in the public understanding of the ethics of AI in brain and mental health and provides a useful resource for any future investigation in this crucial and rapidly evolving area of AI application. The book is of interest to a wide audience in neuroethics, robotics, computer science, neuroscience, psychiatry and mental health.

Dr. Fabrice Jotterand, PhD, MA, is Professor of Bioethics and Medical Humanities and Director of the Graduate Program in Bioethics at the Center for Bioethics and Medical Humanities, Medical College of Wisconsin. He holds a second appointment as Senior Researcher at the Institute for Biomedical Ethics at the University of Basel, Switzerland. He is also the resident philosopher at the MCW Kern Institute where he directs the Philosophies of Medical Education Transformation Laboratory (P-METaL). His work examines the importance of character formation and practical wisdom in the moral development of future physicians as well as how the philosophy of medicine contributes to medical professionalism.His experience as an educator has been fostered by more than fifteen years of teaching courses in neuroethics, bioethics, and medical humanities. Dr. Jotterand’s scholarship and research interests focus on issues including neuroethics, the use of neurotechnologies in psychiatry, neurotechnologies and human identity, the philosophy of medicine and medical professionalism, and bioethics and moral/political philosophy. He has published more than 60 articles and book chapters as well as reviews in leading academic journals and has published five books. He is currently completing a book manuscript entitled The Unfit Brain and the Limits of Moral Bioenhancement that focuses on the ethical and social implications of the potential use of neurotechnologies in psychiatry to alter brain functions to address so-called “moral pathologies” (antisocial, aggressive, and harmful behavior; psychopathic traits).

Dr. Marcello Ienca is a Senior Researcher at the Department of Health Sciences and Technology at ETH Zurich, Switzerland. His research focuses on the ethical, legal and social implications of neurotechnology and artificial intelligence, with particular focus on big data trends in neuroscience and biomedicine, neuroprivacy, human-computer interaction, social robotics, digital health and cognitive assistance for people with intellectual disabilities. He is interested in comparative approaches to the study of human and artificial cognition. Ienca is the Principal Investigator of multi-disciplinary federal research projects and has received several awards for social responsibility in science and technology such as the Prize Pato de Carvalho (Portugal), the Vontobel Award for Ageing Research (Switzerland), and the Paul Schotsmans Prize from the European Association of Centres of Medical Ethics (EACME). He has authored one monograph, one edited volume (Intelligent Assistive Technologies for Dementia, Oxford University Press, 2019), +50 scientific articles in peer-review journals, several book chapters and is a frequent contributor to Scientific American. His research was featured in academic journals such as Nature Medicine, Nature Biotechnology, Neuron, the Lancet Digital Health, the American Journal of Bioethics and media outlets such as Nature, The New Yorker, The Guardian, The Times, Die Welt, The Independent, the Financial Times and others. Ienca is serving as appointed member or expert advisor in a number of national and international governance bodies including the Steering Group on Neurotechnology and Society of the Organisation for Economic Co-operation & Development (OECD) and the Council of Europe’s Bioethics Committee. He is also a former Chair of the Student-Postdoc Committe of the International Neuroethics Society.