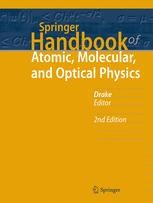 This handbook comprises a comprehensive reference source that unifies the entire fields of atomic, molecular, and optical (AMO) physics, assembling the principal ideas, techniques and results of the field from atomic spectroscopy to applications to comets and global changein comets. Its 91 chapters are written by over 100 authors, all leaders in their respective disciplines.

Carefully edited to ensure a uniform coverage and style and with extensive cross references, together with a guide to the primary research literature, it is both a source of information and an inspiration for graduate students and other researchers new to the field. All chapters offer diagrams of apparatus, graphs, and tables of data.

Twenty-five years on since the Atomic, Molecular and Optical Physics Handbook was first published, and ten years since the publication of the revised Springer edition, the Springer AMO Physics Handbook has become a standard reference in the field, and a starting point for generations of graduate students. In recent years, there have been dramatic advances in many areas of AMO physics involving both fundamental changes and new applications in areas such as quantum information, ultracold atoms, and searches for dark matter. This new edition contains an expanded coverage of these rapidly emerging fields.

Gordon W.F. Drake, FRSC, is a University Professor of Physics at the University of Windsor, Canada, and Principal of Canterbury College affiliated with the University of Windsor. He is a past Chair of the APS Division of Atomic, Molecular and Optical Physics (DAMOP), the IUPAP Commission C15, and is a past President of the Canadian Association of Physicists (CAP). He continued to serve on the Executive of the CAP as Director, International Affairs, and Chair of the Canadian National IUPAP Liaison Committee until 2014.

He received his B.Sc. degree from McGill University, 1964, M.Sc. from the University of Western Ontario, 1965, and Ph.D. from York University, 1967, followed by a postdoctoral position at the Harvard-Smithsonian Center for Astrophysics (1967-69).

He has published 230 refereed research papers, and is widely cited for his high precision calculations for two and three-electron atoms, including relativistic and quantum electrodynamic effects. He has received numerous prizes and awards for his work, including a Killam Fellowship (1990-92), the Canadian Association of Physicists Medal for Achievement in Physics (1994), the Windsor Alumnni Teaching Award (2003), and the Peter Kirkby Memorial Medal for Outstanding Service to Canadian Physics (2015).
Show all