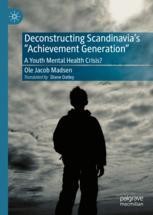 In this book, Professor Ole Jacob Madsen analyses the implications of Scandinavia's current concern for the mental health problems of adolescents, said to be struggling in the face of increasing demands for achievement and success. It critically examines our understanding of this so-called “achievement generation”, questioning whether today’s youth are really worse off than previous generations and how we have come to believe that this is so.

The author’s wide-ranging investigation draws on a large body of research, as well as considering socio-political, historical and regional factors that might be affecting the resilience and mental health among young people. It also provides original psycholinguistic studies of popular media concepts associated with these issues including: “the achievement generation”, “pathological perfection” and “the good girl syndrome”.

Deconstructing Scandinavia’s “Achievement Generation” presents an engaging contribution to key debates around therapeutic culture and society in the 21st century. It will appeal to students and scholars of critical and social psychology, sociology, anthropology, philosophy; as well as to those working in education, social work and mental health.

Ole Jacob Madsen is Professor of Cultural and Community Psychology at the University of Oslo, Norway. His previous works include: The Therapeutic Turn: How Psychology Altered Western Culture (2014), Optimizing the Self: Social Representations of Self-Help (2015) and The Psychologization of Society: On the Unfolding of the Therapeutic in Norway (2018) and The Routledge International Handbook of Global Therapeutic Cultures (2020).

‘Ole Jacob Madsen’s new book on “the achievement generation” is a major achievement. Based on extensive research from psychology, sociology and philosophy, Madsen develops an eye-opening analysis that investigates alarmism on the one hand, where a generation of young people in Scandinavia is typically depicted as particularly vulnerable and prone to mental illness, and a neglect of young people’s problems on the other hand. There is much to learn from this book for all of us who are interested in the complex relationships between society, culture and mental life.’
—Svend Brinkmann, Professor of Psychology, Aalborg University, Denmark

‘A Scandinavian adolescent of the 2020s—“a good girl”— declares oneself to be profoundly happy and secure in a rich and well-structured society — and then reaches out for an anti-depressant pill. Something is amiss here, and the adolescents are the first to feel this. Growing up in the adult utopia of being the “achievement generation” — made into a social imperative — leaves the developing young person to their own devices to deal with loneliness and fears of social exclusion.
This book is a masterpiece of interdisciplinary social science. In his penetratingly skillful analysis of societal texts of different origins, Ole Jacob Madsen  demonstrates how the qualitative scrutiny of the social sciences can cut through the journalistic noise that both evokes beliefs in fake facades of happiness, and the disquiet of the many young people that they must be happy in their “happy society”. The kind of society that the Scandinavian countries have arrived at is best described as a “frozen liquid society” where everything is possible except the possibility to be oneself. The book is a must read for everybody who wants to understand the actual social and psychological processes that are involved in the Scandinavian efforts to reach the goal of an “optimized” society—an impossible undertaking in the open-systemic reality of any society.’
—Jaan Valsiner, Professor of Psychology, Aalborg University, Denmark, and the Estonian Academy of Sciences

In this thought-provoking book, Ole Jacob Madsen makes an original contribution to understanding how therapeutic culture shapes the lives of young people in Scandinavia. Drawing on multifaceted empirical research, he fleshes out the many paradoxes and contradictions behind the so-called “achievement generation”. A must-read for all those interested in understanding how mental health problems are represented, governed and experienced in late modern societies.