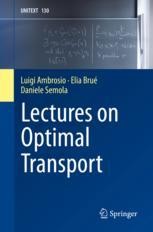 This textbook is addressed to PhD or senior undergraduate students in mathematics, with interests in analysis, calculus of variations, probability and optimal transport. It originated from the teaching experience of the first author in the Scuola Normale Superiore, where a course on optimal transport and its applications has been given many times during the last 20 years. The topics and the tools were chosen at a sufficiently general and advanced level so that the student or scholar interested in a more specific theme would gain from the book the necessary background to explore it. After a large and detailed introduction to classical theory, more specific attention is devoted to applications to geometric and functional inequalities and to partial differential equations.

Prof. Luigi Ambrosio is a Professor of Mathematical Analysis, a former student of the Scuola Normale Superiore and presently its Director. His research interests include calculus of variations, geometric measure theory, optimal transport and analysis in metric spaces. For his scientific achievements, he has been awarded several prizes, in particular the Fermat prize in 2003 and the Balzan Prize in 2019.

Dr. Elia Brué is a postdoctoral member at the Institute for Advanced Studies in Princeton. He earned his PhD degree at the Scuola Normale Superiore in 2020. His research interests include geometric measure theory, optimal transport, non-smooth geometry and PDE.

Dr. Daniele Semola is a postdoctoral research assistant at the Mathematical Institute of the University of Oxford. He was a student in Mathematics at the Scuola Normale Superiore, where he earned his PhD degree in 2020.  His research interests lie at the interface between geometric analysis and analysis on metric spaces, mainly with a focus on lower curvature bounds.
Show all