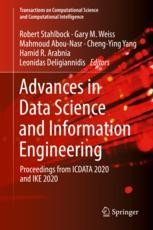 Robert Stahlbock is a researcher and lecturer at the Institute of Information Systems at the University of Hamburg. He is also lecturer at the FOM University of Applied Sciences since 2003. He holds a diploma in Business Administration and a PhD from the University of Hamburg. His research interests are focused on managerial decision support and issues related to maritime logistics and other industries as well as operations research, information systems, business intelligence and data science. He is author of research studies published in international prestigious journals, conference proceedings and book chapters. He serves as guest editor of data science related books, as reviewer for international leading journals as well as a member of conference program committees. He is General Chair of the annual International Conference on Data Science since 2006. He also consults companies in various sectors and projects.

Dr. Gary Weiss is an associate professor in the Department of Computer and Information Science at Fordham University. His main research area is data mining. His early research focused on real-world issues that make learning from data difficult, such as class imbalance. Over the last decade he has directed the WIreless Sensor Data Mining (WISDM) lab, and has focused on extracting knowledge from sensors on smartphones and smartwatches, mainly to perform automated activity recognition and behavioral biometrics. He is currently devoting much of his attention to data mining of educational data. Dr. Weiss has published over ninety papers in Data Mining and other areas of Computer Science. Dr. Weiss received his B.S. in Computer Science from Cornell University, his M.S. in Computer Science from Stanford University, and his Ph.D. in Computer Science from Rutgers University. Prior to starting work at Fordham University in 2004, Dr. Weiss spent more than 15 years working for AT&T Labs. Dr. Mahmoud Abou-Nasr, Adjunct Faculty, CIS Department, University of Michigan Dearborn, USA. Technical Expert, Neural Networks & Intelligent Systems, Research & Advanced Engineering, Ford Motor Company, USA (1993-2018). Dr. Abou-Nasr is a Senior Member of the IEEE and Vice Chair Technical Activities Computational Intelligence & Systems Man and Cybernetics SEM Chapter (2011-2014).  He has received the B.Sc. degree in Electrical Engineering in 1977 from the University Of Alexandria, Alexandria, Egypt, the M.S. and the Ph.D. degrees in 1984 and 1994 respectively from the University Of Windsor, Ontario, Canada, both in Electrical Engineering.  He has been a Technical Expert with Ford Motor Company, Research and Advanced Engineering, where he led research & development of deep learning, recurrent neural networks and advanced computational intelligence techniques for automotive applications. His research interests are in the areas of deep learning, deep convolutional networks, recurrent neural networks, reinforcement learning, pattern recognition, forecasting, data mining, optimization and control.  Currently he is an adjunct faculty member of the computer and information science department, of the University of Michigan Dearborn. Prior to joining Ford, he held electronics and software engineering positions with the aerospace and robotics industries in the areas of real-time control and embedded communications protocols.  He is a co-editor of a book on "Real World Data Mining Applications," Annals of Information Systems, Springer and associate editor of the DMIN'09-DMIN'17, ICDATA'18-ICDATA'19 proceedings.  He is a member of the program and technical committees of IJCNN, WCCI, ISVC and ECAI. He is also a reviewer for IJCNN, MSC, CDC, Neural Networks and IEEE Transactions on Neural Networks & Learning Systems.  Dr. Abou-Nasr has organized and chaired symposia & special sessions in SSCI16, WCCI 2015, DMIN and IJCNN conferences as well as international classification competitions in WCCI Hong Kong (2008) and IJCNN San Jose, CA (2011).

Professor Cheng-Ying Yang received the M.S. degree in Electronic Engineering from Monmouth University, New Jersey, and Ph.D. degree from the University of Toledo, Ohio. He is a member of IEEE Satellite & Space Communication Society. Also, he has the editorships of International Journal of Network Security and International Journal of Electronics and Information Engineering. Currently, he is employed as a Professor at Department of Computer Science, University of Taipei, Taiwan. His research interests are performance analysis of digital communication systems, error control coding, signal processing and computer security.

Professor Hamid R. Arabnia received a Ph.D. degree in Computer Science from the University of Kent (England) in 1987. He is currently a Professor Emeritus of Computer Science at University of Georgia, USA, where he has been since October 1987. His research interests include parallel and distributed processing techniques & algorithms, supercomputing, Data Science, imaging science, and other compute intensive problems. Applications of interest include: medical imaging and security. Most recent activities include: Studying ways to promote legislation that would prevent cyber-stalking, cyber-harassment, and cyber-bullying. As a victim of cyber-harassment and cyber-bullying, in 2017 he won a lawsuit with damages awarded to him for a total of $2.3 Million and $656K attorney costs. Since this court case was one of the few cases of its kind in the United States, this ruling is considered to be important; Final Judgement for damages was issued in Leon County Courthouse of Tallahassee in Florida by Circuit Court Judge. Prof. Arabnia is Editor-in-Chief of The Journal of Supercomputing (Springer). He is also on the editorial and advisory boards of 30 other journals. He is the book series editor-in-chief of "Transactions of Computational Science and Computational Intelligence" (Springer). He has won 12 distinguished awards, including the "Outstanding Research Contributions to the Field of Supercomputing" (President of IEEE/SMC) and "Distinguished Research Award" for Outstanding Contributions to Adaptable Communication Systems (ACM SIGAPP IMCOM). Dr. Arabnia is Fellow and Advisor of Center of Excellence in Terrorism, Resilience, Intelligence & Organized Crime Research (CENTRIC). He has been a PI/Co-PI on about $8 Million externally funded projects, about $200K internally funded projects, and about $4 Million equipment grants. During his tenure as Director of Graduate Programs, Dr. Arabnia secured the largest level of funding in the history of the department for supporting the research and education of graduate students (PhD, MS). Dr. Arabnia has delivered a number of keynote and plenary lectures at international conferences; most recently at: The 14th IEEE International Conference on Parallel and Distributed Systems (ICPADS, Australia); International Conference on Future Generation Communication and Networking (FGCN / IEEE CS, Sanya); The 10th IEEE International Conference on High Performance Computing and Communications (HPCC, Dalian); and ACM IMCOM International Conference. He has also delivered a number of "distinguished lectures" at various universities and research units/centers (USA, Spain, South Korea, Japan, Iran, Saudi Arabia, UK, Canada, Turkey, China, Ireland, Australia, ...); his distinguished lectures were funded and sponsored by US Department of Defense, SERSC of Republic of Korea, US National Science Foundation, H2020 of Europe, and others. Dr. Leonidas Deligiannidis is a Professor of Computer Science at Wentworth Institute of Technology in Boston, MA. His foundation in Computer Science was first established when he earned his B.S. from Northeastern University College of Computer Science. He then went on to obtain two advanced degrees in the field from Tufts University. He has been active in the field since then, investigating subjects like Brain Computer Interfaces, Security, Business-oriented visualizations, and STEM Education. He has also served in industrial positions outside the scope of his academic work, using his acumen for several companies. His industry experience includes both entrepreneur startups in healthcare and high-tech networking companies. He has received multiple awards for his efforts, including multiple Achievement Awards for his contributions to Imaging Science by the World Congress in Computer Science, Computer Engineering, and Applied Computing, IEEE best paper awards, as well as a University Presidential award for his scholarly achievements. In addition, he has served as a referee for many journals in computer science and is a member of the program and organizing committees for notable conferences in his field.
Show all